The arcana of freemasonry by Albert Churchward 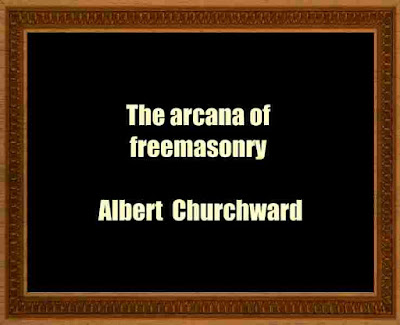 As many Brothers have requested me to publish in an enlarged and more permanent form my Lectures on the ancient sources of Masonry (some of which have appeared in The Freemason), I have felt it my duty as well as a pleasure to comply with their request, in order that it may enable every Brother who is interested in the past origin of the Craft to gain at least a superficial knowledge of its antiquity, which will be outside the present dogmas of the Order.


Some readers of The Freemason have taken objection to my statements, and I take this opportunity, for the sake of Brothers throughout the world, of replying to those of my critics. As regards my chronology, it is something new to me to find a Brother state that the Pliocene Age cannot date as long ago as 600,000 years — all the best authorities that I know would place it much earlier. That 1 am not wrong in dating back the world's history to such great antiquity in my books is proved by the discovery of skeletons of the present type of man, found in the Pliocene strata in Lombardy.


It is important to remember that the skeletons found in this strata were of the modern type of man; proofs that they were Stellar Cult people were found buried with them; and that they lived and died at this period, and were not accidental burials, we have Professor Sergi's authority — a most unimpeachable one. The Pliocene strata were formed from 600,000 to 800,000 years ago.' Is any further proof necessary?
In the Natural History Museum at South Kensington, there is an exhibit of peculiar interest, the reconstructed skull of a primitive man, or woman, found by Mr C. Dawson in a pit at Piltdown Common, Sussex, in the autumn of 191 2, on which Professor Woodward gave a most interesting lecture at the Royal Societies Club. In the discussion which followed I then pointed out that the reconstruction of the mandible must be quite wrong, for to put: on to a skull with a cubic capacity of 1200 cubic centimetres, the jaw of a chimpanzee is alone sufficient proof that the reconstruction made is incorrect. The Pygmy has a cubic capacity of 900 cubic centimetres, on average, and I have found one with only 850 cubic centimetres. The highest anthropoid ape is 600 cubic centimetres. This skull, in my opinion, was a Nilotic Negro of the first exodus without Hero-Cult, types of which still exist in Australia and inner Africa.


The Stellar Cult existed for at least 300,000 years, and the people of this cult travelled all over Europe, Africa, most parts of Asia, America- North, and South (except the extreme North and South), but did not go to Australia, New Zealand, New Guinea, and some other parts. The Lunar Cult followed this, and after that the Solar, which existed in some parts of Europe (although not in the extreme north), in Asia and Japan, but it did not reach the north of Japan. In America the Solar people reached Yucatan and travelled south as far as Peru; they did not go to North America, the Pacific Islands, and only to the line of least resistance in South America, down the west side along the Andes. They were stopped at Bolivia by the fierce old Stellar Cult people from going farther south, as they were from going north of Yucatan by the North Mexican tribes.


The art of recording ideas by signs and symbols came before the use of articulate speech. A sign does not demand a word, and may not imply the existence of a word. A sign or symbol was used to represent the thing first — an animal, or bird, or some object for which man had no articulate sound as yet. The articulate sound followed. The primitive man drew a snake to represent a snake — he afterwards called it " fu fu " because the snake made this sound. He drew a goose to represent this bird before he could give it a name — from the sea or hiss of the goose he obtained the sound. Hundreds of other examples could be given in support of this, which Professor Maspero acknowledges is correct.