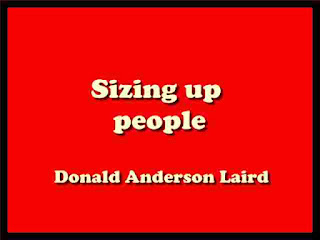 We are always sizing up others, so let us learn how to do a better job of it. Then we can make our daily judgments of people more profitable for ourselves and the world in general. The receptionist has to make a quick decision about the stranger who has just come in.
The newest worker sizes up his boss to figure out how to get on his good side and at the same time, the boss is giving the new employee a once-over. The salesman sizes up the customer before deciding whether to emphasize price, quality, style, or prestige in his sales talk.
The executive depends largely on his success upon his correct estimates of associates, customers, and competitors. We are even required to estimate another person's mood from the sound of his voice over the telephone.
A spokesman for Selfridge & Company, the great London store, said, "The leader in business must make up his mind that the study of human nature is as much his duty as the study of markets and materials, that he should be as much disturbed when he finds he has misread a man as if he had misread a contract." The Du Pont Company maintains that the success of a business depends upon having the right man in the right spot at the right time
. That requires judging men as well as what the job takes with some accuracy. George C. Brainard, president of the Addressograph-Multi- graph Corporation, told us, "The success of any enterprise is largely dependent upon management's skill in selecting the right people for the right jobs. The rate of advancement from supervisory to executive levels may be proportionate to the development and use of skill to judge the qualifications of personnel for promotion.
The importance of the ability to judge people cannot be overemphasized, as the need for it, in a group effort, is all-embracing." Carleton H. Palmer, chairman of E. R. Squibb & Sons, has said, "The fundamental asset of any business or of any enterprise is people.
The successful executive is he who, by sympathetic understanding and training, accurately assesses people, understands their motives, and knows how to bring out their maximum capabilities." John Holmes, the messenger boy who became president of Swift & Company, said, "The success of any business hinges on how well it is able to select, organize, equip and train its people all the way from the bottom to the top."
The best way to have an edge on competitors today is to have better-qualified people than competitors have. Companies frequently use identical machinery and buy materials at the same prices, but some of them have an advantage because they have sized up their employees well and put the right people in the right jobs.
They have strengthened their organizations by making a trustworthy estimate of each subordinate's potential, and by then helping each to reach that potential. When an employee fails to make good, perhaps it is the executive who has blundered by sizing the man up incorrectly and failing to develop him. Misconceptions about the abilities or interests of others make trouble in personal life as well as in business. Melinda Miller's mother, for instance, sized up a young Clevelander incorrectly. She decided John D. Rockefeller would never amount to much, and would not permit her daughter to marry him.
A few years later Emma Saunders turned him down because she considered him a poor social risk. Unhappy marriages and divorces are often due to errors in judging others. Many young people are forced into unsuitable occupations or kept from their best work because parents, teachers, or employers size them up wrong. "You have no talent for the piano.
Your hands are the wrong shape, too/' a teacher told Paderewski, who was to become the world's premiere pianist. "Your boy will never learn to keep store; better take him back to the farm," a country storekeeper told Marshall Field's father. A dozen years later, when young Field was a partner in Chicago's fastest-growing store, the old storekeeper wouldn't believe it.
"Must be something fishy about it," he said. The fishy part, of course, was his own incorrect estimate of the young boy's potential. Why do you think it safe to lend money to one person, but not to another? How sure are you that you have picked the best physician for you? Or lawyer?
Do you think that cashier will try to shortchange you? How can you be sure your teenage child may be trusted to drive the family automobile? Do you sometimes vote for candidates who fail to fulfil your expectations? Do you sometimes say things that offend another when you had intended to please him?
In daily life, most of us size up other people incidentally, without making an effort to verify our hunches about them. As a result, most judgments of character are no better than guesswork, as many experiments have proved. Furthermore, im- portant qualities can be overlooked as easily as minor ones. An employee can be insane, for example, yet his foreman and relatives may not realize it until some violence is done. Sometimes employees who are sized up as trustworthy embezzle thousands of dollars before they are even suspected. Such common blunders, or oversights, in sizing up people make life and work needlessly rough.