Mysto Magic by A. C. Gilbert 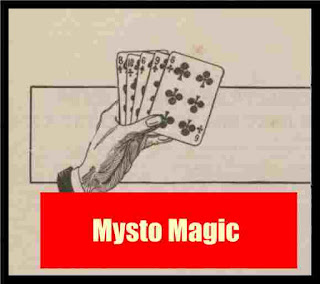 Excerpt:
How to be Magician ?
Hello, boys! Here’s fun. With your set of Gilbert’s Mysto Magic Tricks, you Can do some of the very same tricks you have seen done by magicians on the stage. If you have never worked any magic tricks before, you have no idea of the fun you can have.
The directions in this Manual of Instruction will enable you to give a really fine show, starting with the simplest trick, and ending with * splendid big illusion such as is used by professionals. Appearing before audiences will give you self-confidence which, when you grow up will stand you in &°od stead in talking at big business meetings. When a boy, Mr Gilbert learned to do magic tricks and the practice he got, talking to audiences, knocked all the h^slifulncss out of him.
WHAT MAGIC IS.
Hundreds and hundreds of years ago the priests in Egypt, and other far Eastern countries, used to do magic tricks for a very Afferent reason from that which actuates our modern magicians. In order to impress the common people with their supernatural ability and prove that they ^ere in league with the gods, and good and evil spirits, they had some of their temples arranged so that the doors would open when fires were lighted on the ^Uars, trumpets would blow when the doors were opened, and other unusual an impressive marvels would occur.
These things appealed to the superstitious l^ople of the early days, and gave the priests the power and prestige they desired hi those days magic and religion went hand in hand. Nowadays the modern magician employs his skill and mechanical apparatus to entertain. No one believes that he possesses supernatural power. Robert f^oudin, a great French magician, has said something to the effect that a conjurer is an actor playing the part of a magician. So when you do tricks before y°ur friends, you are just playing a part for their entertainment.
If you try to do a trick before an audience before you are familiar with it yourself, the whole effect is liable to be spoiled. You should Practice your tricks before a mirror many times before even attempting to give a show. This is not hard work like some practising seems to be, because half th-* hill of doing tricks is in practising them. We have all heard that “the quickness of the hand deceives the eye”. Nothing could be farther from the truth because you cannot move your hand so rapidly that the eye cannot follow it. In fact, if you make any quick movements you
Author: A. C. Gilbert
Publication Date: 1919