Greek wit: a collection of smart sayings and anecdotes 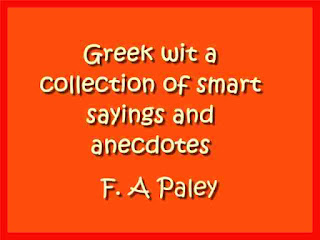 the little volume of "Greek Wit," though it has been received with mixed praise and blame, yet has met with sufficient success to justify the Publishers in issuing a second series, which was conditionally promised, and which, it is believed, will be found on the whole to contain a better collection of "Sayings" than the former volume.


The truth seems to be, that some who had expected, from the title, a "funny" book — a mere collection of light jokes — were a little disappointed. I had taken care to point out the difference between fun and wit and had also noticed the apparent want of capacity in some persons for really appreciating either the one or the other.

To such, of course, books of this kind will always seem more or less dull. There are others who can see the wit or the point of a few anecdotes, but not of the majority. Not unnaturally, both these regard the selection as " rather a poor one on the whole; " and they think, no doubt (and rightly, according to their own standard), that a good many might be struck out altogether, and that better, i.e., some others more amusing to them, could easily be substituted.
Few English words are more difficult to define than Wit. In its origin meaning merely shrewd- ness and intelligence, it has no connection, except incidentally, with joke and fun. We laugh at the latter, we admire the former. True wit is more often allied to satire, and the objects of witticisms, we know, are but too apt to be offended. Wit may be simply didactic, and (as in most of the anecdotes in this little book) convey great truths in terse or homely sayings, or in friendly banter- ings ; but its natural bent is mostly displayed in cutting remarks. Hence we are wont to call wit "incisive," and to talk of its point, its edge, its keenness,
The greatest wits of antiquity were the poets Aristophanes and Martial. Alas ! that their morality was not equal to their genius, or rather, that their genius should have been perverted to the making light of immorality ! Among our national celebrities, Dean Swift, Sheridan, and Sydney Smith stand unrivalled. Wit is a peculiar phase of cleverness, possessed by few, but one that is greatly appreciated by all who are not them- selves dunces.

Excerpt:
ONE day, when snow was falling, the King of the Scythians asked a man, who was braving it unclad, whether he felt cold ? The man asked in return, whether his majesty felt cold in his face? " Certainly not," said the king. " Then," replied the man, "neither do I feel the cold, for I am all face"
Xantippe, the wife of Socrates, being reluctant to put on her husband's mantle to go and see a procession, was thus rebuked by him : " What you are going for is not to see, but to be seen."
A vain old envoy from Keos came to Sparta with his hair dyed, being ashamed to appear aged. Introduced to the assembly, he delivered his mes- sage. Upon which Archidamus, the Spartan king,
rose and said, ' ' How can there be anything sound in the words of a man who goes about with a lie on his head as well as in his heart ?"
The elder Dionysius, in reproaching his son and heir for some act of debauchery, asked, if he ever knew him, the father, do the like? "You," replied the youth, "had not a father who was a king." "And you," rejoined the other, "will never have a son a king, if you don't leave oft" acting thus."
Author: F. A Paley
Publication Date:1881