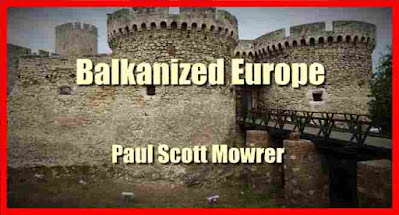 a study in political analysis and reconstruction

This book is the result of eleven consecutive years of experience as a special European correspondent for The Chicago Daily News. It probably contains errors both of observation and of opinion: for to see truly into a complex web of motives and movements is a task whose difficulty can be suspected only by those who have seriously attempted it; and to endeavor to read a few lines of the future out of the evanescent hieroglyphics of the present is perhaps even more temerarious.
Time alone can reveal to what extent I have been right, and in what respects I have been wrong. Meanwhile, if the book, in presenting certain problems, and raising certain questions, do thereby stimulate broader thinking with regard to international affairs, it will have served its purpose. The specialist no doubt has his mind made up regarding the war, the peace conference, and all their multiple consequences. It is rather to the general reader that I would address myself; and although I have read much, and absorbed from many sources, I have therefore preferred not to encumber the text with footnotes and bibliographical references.
The book is frankly "journalistic." In order that whatever of value it contains might be placed at the disposition of the public without more delay, I have had to sacrifice the satisfaction of slow composition and of conscientious revision, and write over-hastily in the leisure moments in busy days. Meanwhile, situations are developing rapidly, and although I have sought in the main to keep to essentials, and to the more enduring aspects, there are almost certain to have been a number of changes or evolutions even before these lines are printed.
For all of this, I ask the reader's indulgence. A considerable amount of my material has already appeared in the form of articles in The Chicago Daily News and other affiliated newspapers. For permission to use it again here, I have to thank the kindness of that far-sighted and perspicacious publisher and editor, Mr. Victor F. Lawson, who was one of the first newspaper proprietors to foresee the importance which "foreign news" was destined to attain in the eyes of the American public.