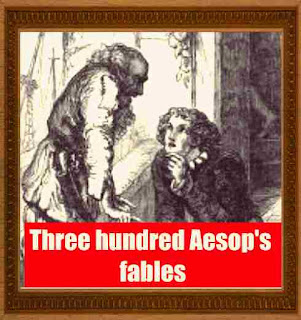 TheTale, the Parable, and the Fable are all common and popular modes of conveying instruction. Each is distinguished by its own special characteristics. The Tale consists simply in the narration of a story either founded on facts, or created solely by the imagination, and not necessarily associated with the teaching of any moral lesson. The Parable is the designed use of language purposely intended to convey a hidden and secret meaning other than that contained in the words themselves; and which may or may not bear a special reference to the hearer or reader.
The Fable partly agrees with, and partly differs from, both of these. It will contain, like the Tale, a short but real narrative; it will seek, like the Parable, to convey a hidden meaning, and that not so much by the use of language, as by the skilful introduction of fictitious characters; and yet, unlike to either Tale or Parable, it will ever keep in view, as its high prerogative, and inseparable attribute, the great purpose of instruction, and will necessarily seek to inculcate some moral maxim, social duty, or political truth. The true table, if it rises to its high requirements, ever aims at one great end and purpose the representation of human motive, and the improvement of human conduct, and yet ''t so conceals its design under the disguise of fictitious characters, by clothing with speech the animals of the field, the birds of the air, the trees of the wood, or the beasts of the forest, that the reader shall receive advice without perceiving the presence of the adviser. Thus the superiority of the counsellor, which often renders counsel unpalatable, is kept out of view, and the lesson comes with the greater acceptance when the reader is led, unconsciously to himself, to have his sympathies enlisted in behalf of what is pure, honourable, and praiseworthy, and to have his indignation excited against what is low, ignoble, and unworthy.
The true fabulist, therefore, discharges a most important function. He is neither a narrator nor an allegorist. He is a great teacher, a corrector of morals, a censor of vice, and a commender of virtue. In this consists the superiority of the Fable over the Tale or the Parable. The fabulist is to create a laugh, but yet, under a merry guise, to convey instruction. Phaedrus, the great imitator of Aesop, plainly indicates this double purpose to be the true office of the writer of fables.
The fables were in the first instance only narrated by Aesop, and for a long time were handed down by the uncertain channel of oral tradition. Socrates is mentioned by Plato f as having employed his time while in prison, awaiting the return of the sacred ship from Delphos which was to be the signal of his death, in turning some of these fables into verse, but he thus versified only such as he remembered, Demetrius Phalereus, a philosopher at Athens about 300 B.C., is said to have made the first collection of these fables. Phaedrus, a slave by birth or by subsequent misfortunes, and admitted by Augustus to the honours of a freedman, imitated many of these fables in Latin iambics
Author: Aesop
Translator: George Fyler  Townsend
Illustrator: Harrison Weir
Publication Date: 1870
Company:G. Routledge