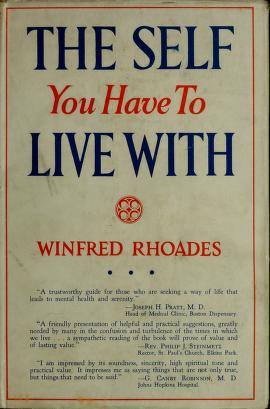 A book of inspiration and beauty!

Winfred Rhoades brings to the problems of daily life the approach of the modern psychologist who recognizes religion as a powerful aid to successful, courageous living. In these troubled and uncertain times, many people are searching for a more complete and satisfying philosophy There are chapters on "learning how to live"; on "turning unadjusted into adjustment"; on "the art of not worrying": on "relaxation and power." Mr Rhoades offers, in combining psychology with a true understanding of the meaning of religion, a challenge to all who want to achieve a joyous and well-rounded life
Every person lives in at least four worlds. There is the physical world of earth and sky and trees and houses and all the rest of it. There is the social world of people good and bad, rich and poor, interesting and tedious, successful and unsuccessful.
There is the spiritual world that enfolds and interpenetrates the physical and social worlds and gives them whatever final meaning they have. And there is a world of one's own creating which may be very different from the actuality of the physical, social, and spiritual worlds that form one's environment. That world of one's own creating is the subject of this book. Grateful appreciation for reading the manuscript and making valued criticisms is hereby expressed to Dr Joseph H. Pratt, Professor of Clinical Medicine at Tufts Medical School, and Chief of the Medical Clinic at the Boston Dispensary unit of the New England Medical Centre; and also to Miss Edith. Canterbury, head of the Social Service Department at the same institution. Certain chapters of this book have already appeared in their original form in The Forum and in Mental Hygiene, and other disconnected portions have been culled frprn articles that appeared originally in Advance and in Weekly Unity. Sincere thanks are due to the editors of those publications for gracious permission to include the material here. Hearty acknowledgement is also made to the following- ing publishers for permission to make brief citations from works put forth by them: — to The Macmillan Company, New York, for passages from Hygiene of the Mind, by Ernst von Feuchtersleben; to Little, Brown & Company, of Boston, for a reference to Letters and Religion, by John Jay Chapman; to Lea & Febiger, Philadelphia, for citations in An Autobiography, by Edward L. Trudeau, M.D.: to Simon & Schuster, Inc., New York, for quotations from the Works of Plato, and from Descartes' Discourse on Method, both in the Modern Library Edition.