The psychology of relaxation 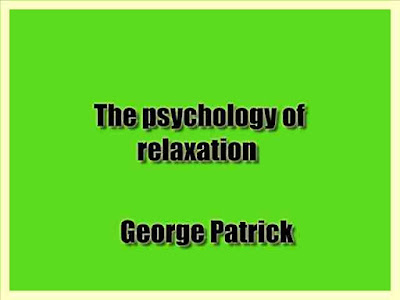 The Gospel of Relaxation was the subject of a speech made by Mr Herbert Spencer at a dinner given in his honour in New York City in 1882. Mr Spencer called attention to the extreme form of "persistent activity" which characterizes the Ameri- can people. The energy of the savage, he said, was spasmodic. He could not apply himself persistently to work. He lived in the present and did not worry about the future.
A civilized man more and more pursues a future goal and applies himself to work until it becomes a passion. In America, said Mr Spencer, this strenuous and high-pressure life has become extreme, and a counterchange — a reaction — must be imminent.
We take our multitudinous responsibilities too seriously. There are too many lines in our faces, our grey hairs appear too early, and our nervous breakdowns are too frequent. Damaged constitutions and damaged posterity are among the results. Emerson, with his saying that the first requisite of a gentleman is to be a perfect animal, is a safer guide for us than Carlyle with his gospel of work. More recently, Professor James, Annie Payson Call, and other writers ^ have eloquently preached this same gospel of relaxation.
We are told that we are too breathless; that we live under too much stress and tension; that we are too intense and carry too much expression in our faces; that we must relax, let go, breathe deeply, and un- burden ourselves of many useless contractions. There seems to be a good deal of truth in this. Some of us manage to escape neurasthenia, but few of us are free from fatigue, chronic or acute. We hear with amazement now and again someone say, "I was never tired in my life." Surely un- der normal conditions we ought not to be so tired as we are, nor tired so often.

To select for psychological treatment, and to bring together in one book such subjects as play, sport, laughter, profanity, alcohol, and war may seem to some capricious — to others, possibly, even sensational.
Let me assure the reader that nothing could be farther from my purpose than to make any such appeal to popular favour. I have attempted a prosaic, and, so far as to lay in my power, strictly scientific treatment of these subjects from the psychological and psychogenetic standpoint. These subjects have been chosen, as I have explained in the introductory chapter because they all illustrate one fundamental law, that of relief from the stress and tension which characterize our modem life.
The connecting idea which links together these several themes is the catharsis idea, but the catharsis idea itself, as it appears in Aristotle and modem writers, I have found it necessary to subject to a new interpretation.
Content of the book:
Introduction.--The psychology of play.--The psychology of laughter.--The psychology of profanity.--The psychology of alcohol.--The psychology of war.--Conclusion
Published: 1916
Author:  George Thomas White Patrick