The psychology of peoples (1898) PDF ebook  by Gustave Le Bon 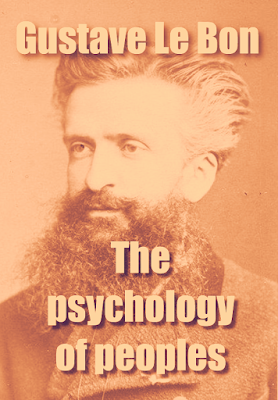 Excerpt from the introduction:
Origin and development of the idea of equality — The consequences it has had — The price already paid for its application — Its influence at the present day on the masses — The problems examined in the present work — An inquiry into the- principal factors of the general evolution of peoples — Is this evolution determined by institutions? — The elements of each civilisation: institutions, arts, creeds, etc., and whether they have not certain psychological foundations peculiar to each people? — The element of chance in history and its permanent laws.
The civilisation of a people is based on a small number of fundamental ideas, which determine its institutions, its literature and its arts. These ideas come very slowly into being, and they are also very slow to disappear. Long after their erroneous nature has become clear to cultivated minds, they remain indisputable truths for the masses and continue to exert their influence on the rank and file of a nation.
It is difficult to obtain recognition for a new idea, but it is no less difficult to discredit an idea that has long been generally accepted. Humanity has always been exceedingly loth to abandon its decayed ideas and its moribund gods. It is barely a century and a half ago that certain philosophers, who, it should be remarked^ were very ignorant of the primitive history of man, of the variations of his mental constitution and of the laws of heredity, propounded the idea of the equality of individuals and races. This idea, which would naturally be most attractive to the masses, ended by firmly implanting itself in their mind, and speedily bore fruit. It has shaken the foundation of the old societies, given birth to the most formidable of revolutions, and thrown the Western world into a series of convulsions, the end of which it is impossible to foresee.
Doubtless certain of the inequalities among individuals and races were too apparent to be seriously disputed; but people found it easy to persuade themselves that these inequalities were merely the outcome of differences of education, that all men are bom equally intelligent and good, and that the sole responsibility for their perversion lies with the institutions they live under. This being the case the remedy was simple in the extreme: all that had to be done was to reform the institutions and to give every man an identical education.
It is in this way that institutions and education have ended by becoming the great panaceas of modern democrats, the means of remedying inequalities that clash with the immortal principles that are the only divinities that survive. to-day. And yet science, as it has progressed, has proved the vanity of the theories of equality and shown that the mental gulf created by the past between individuals and races can only be filled up by the slowly accumulating action of heredity. Modern psychology, together with the stern lessons of experience, has demonstrated that the institutions and the education which suit some individuals and some races are most harmful to others. But when ideas are once in circulation it is not in the power of philosophers to destroy them when they arrive at the conviction that they are erroneous. Like a swollen stream that has overflown its banks, the idea continues its destructive progress with which nothing can interfere.
There is no psychologist, no traveller, no fairly intelligent statesman who is not aware how erroneous is this chimerical notion of the equality of men, which has thrown the world into confusion, brought about in Europe a gigantic revolution, involved America in the sanguinary War of SiJccession, and landed all the French colonies in a state of lamentable decadence; yet in spite of this knowledge, they are few indeed who venture to combat this notion. Moreover, the idea of equality, far from being on the decline, continues to make headway.
It is in the name of this idea that socialism, which seems destined to enslave before long the majority of Western peoples, pretends to ensure their welfare. It is in its name that the modern woman, forgetting the deep-lying mental differences that separate her from man, claims the same rights and the same education as man, and will end, if she is triumphant, in making of the European a nomad without a home or a family.
Download PDF book 3.7 MB