The thoughts of the Emperor M. Aurelius Antoninus 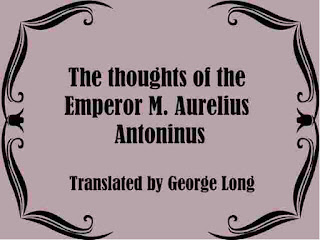 It was the doctrine of Marcus Aurelius that most of the ills of life come to us from our own imagination, that it was not in the power of others seriously to interfere with the calm, temperate life of an individual, and that when a fellow being did anything to us that seemed unjust he was acting in ignorance, and that instead of stirring up anger within us it should stir our pity for him.

Oftentimes by careful self-examination, we should find that the fault was more our own than that of our fellow, and our sufferings were rather from our own opinions than from anything real. The circle of man's knowledge is very limited, and the largest circles do not wholly include the smallest. They are intersecting and the segment common to any two is very small.


Whatever lies outside this space does not exist for both. Hence arise innumerable contests. The man having the largest intelligence ought to be very generous to the other. Being thankful that he has been blessed in so many ways, he should do all in his power to enlighten his less favored fellow, rather than be angry with him on account of his misfortune. Is he not sufficiently punished in being denied the light?
Antoninus set out for the east on hearing of Cassius' revolt. Though he appears to have returned to Bome in a.d. 174, he went back to prosecute the war against the Germans, and it is probable that he marched directly to the east from the German war. His wife Faustina who accompanied him into Asia died suddenly at the foot of the Taurus to the great grief of her husband. Capitolinus, who has written the life of Antoninus, and also Dion Cassius accuse the empress of scandalous infidelity to her husband and of abominable lewdness.
But Capitolinus says that Antoninus either knew it not or pretended not to know it. Nothing is so common as such malicious reports in all ages, and the history of imperial Bome is full of them. Antoninus loved his wife and he says that she was " obedient, affectionate and simple." The same scandal had been spread about Faustina's mother, the wife of Antoninus Pius, and yet he too was perfectly satisfied with his wife. Antoninus Pius says after her death in a letter to Fronto that he would rather have lived in exile with his wife than in his palace at Bomo without her.
There are not many men who would give their wives a better character than these two emperors. Capitolinus wrote in the time of Diocletian. He may have intended to tell the truth, but he is a poor feeble biographer. Dion Cassius, the most malignant of historians, always reports, and perhaps he believed any scandal against anybody.
Antoninus continued his journey to Syria and Egypt, and on his return to Italy through Athens he was initiated into the Eleusinian mysteries. It was the practice of the emperor to conform to the established rites of the age and to perform religious ceremonies with due solemnity. We cannot conclude from this that he was a superstitious man, though we might perhaps do so if his book did not show that he was not. But this is only one among many instances that a ruler's public acts do not always prove his real opinions. A prudent governor will not roughly oppose even the superstitions of his people, and though he may wish that they were wiser, he will know that he can not make them so by offending their prejudices.