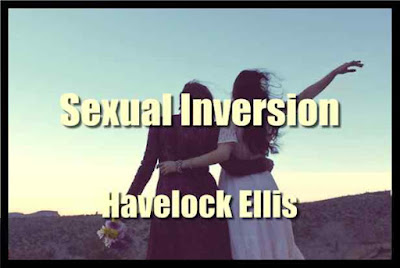 It has been remarked by Professor Wilhelm Ostwald that the problem of homosexuality is a problem left over to us by the Middle Ages, which for five hundred years dealt with inverts as it dealt with heretics and witches.
To regard the matter thus is to emphasize its social and humanitarian interest rather than its biological and psychological significance. It is no doubt this human interest of the question of inversion, rather than its scientific importance, great as the latter is, which is mainly responsible for the remarkable activity with which the study of homosexuality has been carried on during recent years. The result has been that during the fourteen years that have passed since the last edition of this study was issued, so vast an amount of work has been carried on in this field that the preparation of a new edition of the book has been a long and serious 'task. Nearly every page has been rewritten or enlarged and the Index of Authors consulted has more than doubled in length. The original portions of the book have been still more changed; sixteen new Histories have been added, selected from others in my possession as being varied, typical, and full.
These extensive additions to the volume have rendered necessary various omissions. Many of the shorter and less instructive Histories contained in earlier editions have been omitted, as well as three Appendices which no longer seem of sufficient interest to retain. In order to avoid an undue increase in the size of this volume, already much larger than in the previous editions, a new Study of Eonism, or sexoesthetic inversion, will be inserted in vol. v, where it will perhaps be at least as much in place as here.

CHAPTER I.
Introduction.
Homosexuality Among Animals — ^Among the Lower Human Races — The Albanians — The Greeks — The Eskimos — The Tribes of the Northwest United States — ^Homosexuality Among Soldiers in Europe — Indifference Frequently Manifested by European Lower Classes — Sexual Inversion at Rome — Homosexuality in Prisons — Among Men of Exceptional Intellect and Moral Leaders— Muret — Michelangelo — Winkelmann — Homosexuality in English History— Walt Whitman — ^Verlaine — Burton's Climatic Theory of Homosexuality — The Racial Factor — The Prevalence of Homosexuality Today .' 1
CHAPTER II.
The Studt of Sexual Inversion.
Westphal — Hossli — Casper — Ulrichs — Krafft-Ebing — Moll — Fgrg — Kieman — Lydston — Raffalovich — ^Edward Carpenter — Hirschfeld 65
CHAPTER III.
Sexual Inversion in Men.
Relatively Undifferentiated State of the Sexual Impulse in Early Life — The Freudian View— Homosexuality in Schools — The Question of Acquired Homosexuality — Latent Inversion — ^Re- tarded Inversion— Bisexuality — The Question of the Invert's Truthfulness — ^Histories 75
CHAPTER IV.
Sexuai Inveesion in Women
. Prevalence of Sexual Inversion Among Women — Ajnong Women of Ability — ^Among the Lower Races — Temporary Homosexuality in Schools, etc. — Histories — ^Physical and Psychic Characteristics of Inverted Women — The Modern Development of Homosexuality Among Women 195
CHAPTER V.
The Nature of Sexual Inveesion.,
Analysis of Histories^^Tvace— Heredity — General Health — First Appearance of Homosexual Impulse — Sexual Precocity and Hyperesthesia — Suggestion and Other Exciting Causes of Inversion — Masturbation — ^Attitude Toward Women — Erotic Dreams — Methods of Sexual Relationship — Pseudosexual Attraction — —Physical Sexual Abnormalities — Artistic and Other Aptitudes — Moral Attitude of the Invert 264
CHAPTER VI.
The Theory of Sexual Inversion.
What is Sexual Inversion? — Causes of Diverging Views — The Theory of Suggestion Unworkable — Importance of the Congenital Element in Inversion — ^The Freudian Theory — Embryonic Hermaph- eroticism as a Key to Inversion — Inversion as ai Variation or "Sport" — Comparison with Color-blindness, Color-hearing, and Similar Abnormalities — ^What is an Abnormality? — ^Not Necessarily a Disease — Relation of Inversion to Degeneration — Exciting Causes of Inversion — Not Operative in the Absence of Predis. position, . . . . 302
the book details :  Download 12.3 MB