Pushing to the front, or Success under difficulties - Enlarged and Revised 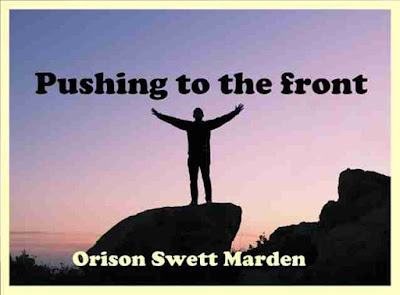 From Introduction:
This revised and greatly enlarged edition of " Push- ing to the Front " is the outgrowth of almost world-wide demand for an extension of the idea which made the original small volume such an ambition- arousing, energizing, inspiring force.
It is doubtful whether any other book, outside of the Bible, has been the turning point in more lives. It has sent thousands of youths, with renewed de- termination, back to school or college, back to all sorts of vocations which they had abandoned in moments of discouragement.
It has kept scores of businessmen from failure after they had given up all hope. It has helped multitudes of poor boys and girls to pay their way through college who had never thought a liberal education possible. The author has received thousands of letters from people in nearly all parts of the world telling how the book has aroused their ambition, changed their ideals and aims, and has spurred them to the successful undertaking of what they before had thought im- possible.
the book has been translated into many foreign languages. In Japan and several other countries, it is used extensively in public schools. Distinguished educators in many parts of the world have recommended its use in schools as a civilization-builder. Crowned heads, presidents of republics, distinguished members of the British and other parliaments, members of the United States Supreme Court, noted authors, scholars, and eminent people in many parts of the world* have eulogized this book and have thanked the author for giving it to the world*
This volume is full of the most fascinating romances of achievement under difficulties, of obscure beginnings and triumphant endings, of stirring stories of struggles and triumphs. It gives inspiring stories of men and women who have brought great things to pass. It gives numerous examples of the triumph of mediocrity, showing how those of ordinary ability have succeeded by the use of ordinary means. It shows how invalids and cripples even have triumphed by perseverance and will over seemingly insuperable difficulties.
The book tells how men and women have seized common occasions and made them great; it tells of those of average ability who have succeeded by the use of ordinary means, by dint of indomitable will and inflexible purpose. It tells how poverty and hardship have rocked the cradle of the giants of the race. The book points out that most people do not utilize a large part of their effort because their mental attitude does not correspond with their endeavour, so that although working, for one thing, they are really expecting something else; and it is what we expect that we tend to get.
No man can become prosperous while he really expects or half expects to remain poor, for holding the poverty thought, keeping in touch with poverty-producing conditions, discourages prosperity. Before a man can lift himself he must lift his thoughts. When we shall have learned to master our thought habits, to keep our minds open to the great divine inflow of life force, we shall have learned the truths of human endowment, human possibility,,
The book points out the fact that what is called success may be ensuring that when money so much that they sacrifice their friendships, their fat lies, their home life, sacrifice position, honour, health, everything for the dollar, their life is a failure, although they may have accumulated money. It shows how men have become rich at the price of their ideals, their character, at the cost of everything noblest, best, and trust in life.
It preaches the larger doctrine of equality; the equality of will and purpose which paves a clear path even to the Presidential chair for a Lincoln or a Garfield, for anyone who will pay the price of study and struggle. Men who feel themselves badly handicapped, crippled by their lack of early education, will find in these pages great encouragement to broaden their horizon and will get a practical, helpful, sensible education in their odd moments and half-holidays. Dr Marden, in " Pushing to the Front," shows that the average of the leaders is not above the average of ability. They are ordinary people but of extraordinary persistence and perseverance.
It is a storehouse of noble incentive, a treasury of precious sayings. There is inspiration and encouragement and helpfulness on every page. It teaches the doctrine that no limits can be placed on one's career if he has once learned the alphabet and has push; that there are no barriers that can say to aspiring talent, "Thus far, and no farther,," Encouragement is its keynote; it aims to arouse to honourable exertion those who are drifting without aim, to awaken dormant ambitions in those who have grown discouraged in the struggle for success.
Author: Orison Swett Marden
Publication Date:1911
Download 32.7  MB