Monarch, the big bear of Tallac 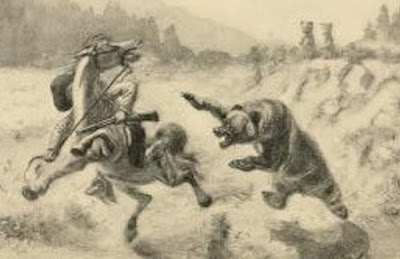 Introduction:
To the memory of the days in Tallac's Pines, whereby the fire I heard this epic tale. Kind memory calls the picture up before me now, clear, living clear: I see them as they sat, the one small and slight, the other tall and brawny, leader and led, rou^h men of the hills. They told me this tale in broken bits they gave it, a sentence at a time.
They were ready to talk but knew not how. Few of their words and those they used would be empty on paper, meaningless without the puckered lip, the interests, the brutal semi-snarl restrained by human mastery, the. snap and jerk of wrist and gleam of steel- grey eye, that really told the tale, of which the spoken word was the mere headline. Another, a subtler theme was theirs that night; not in the line but in the interline it ran and listening to the hunter's ruder tale, I heard as one may hear the night birds singing in the storm; amid the glitter of the mica, I caught the glint of gold, for theirs was a parable of hill-born power that fades when it finds the plains.
They told of the giant redwood's growth from a tiny seed; of the avalanche that, born a snowflake, heaves and grows on the peaks, to shrink and die on the level lands below.
They told of the river at our feet: of its rise, a thread-like rill, afar on Tallac's side, and its growth a brook, a stream, a little river, a river, a mighty flood that roiled and ran from hills to plain to meet a final doom so strange that only the wise believe. Yes, I have seen it; it is their to-day the river, the wonderful river, that unabated flows, but that never reaches the sea.
I give you the story then as it came to me, and yet I do not give it, for theirs is a tongue unknown to the script: I give a dim translation; dim, but in all ways respectful, reverencing the indomitable spirit of the mountaineer, worshipping the mighty Beast that nature built a monument of power, and loving and worshipping the clash, the awful strife heroic, at the close, when these two met.
Author: Ernest Thompson
Publication Date 1904