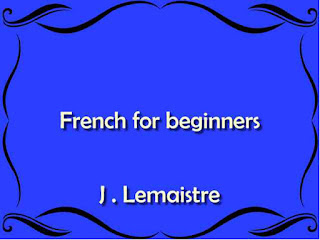 In this little book intended for beginners, the grammatical instruction, which so far as it goes is systematic, is kept distinct from the exercises. On the left-hand pages, there is a simple French grammar, while on the right has been placed such a number of exercises on each subject as has been thought necessary to impress upon the mind of the pupil the corresponding doctrine. Any attempt to teach a language without giving a thorough and systematic knowledge of the accidence must prove a failure, and equally unsuccessful will be the teaching of grammar without any practical work. In my opinion, it is by the combination of the grammatical and Ollendorff methods that any language can be well learned, and this is the principle that has guided me in compiling this book for beginners.

The Regular Verb is arranged so that all the corresponding tenses may be learned at once, the resemblances and differences between the four conjugations readily striking the eye of the learner, by their juxtaposition.  together with exceptional forms and difficulties, which do not come within the scope of a book so purely introductory, are omitted.
The Conversation exercises have been formed with the view of inducing the pupil to effort in a direction too little aimed at in French Grammars, and in which there should be a greater success in English schools. Having studied


the grammatical part of the book, and having acquired the necessary knowledge of accidence, the pupil under the guidance of a good master should have no difficulty in making a profitable use in the way of conversation of the words supplied at the top of each page. Parrot-like learn- ing of phrases is thus avoided, and the pupil is encouraged to an intelligent exercise of his conversational powers in a new language.

In teaching even my most junior classes I have been struck with the eager interest excited by the observation of the connection between French words and the Latin words with which the pupils were already familiar. Keenness in a philological direction is not an unusual feature among young persons, and it is well to take advantage of this by a continual comparison of two languages so closely related. In such works as those of Chassang and Breymann, this is admirably done, but I see no reason why the interest of the youngest pupil should not be awakened by the same method.