On the Genealogy of Morality 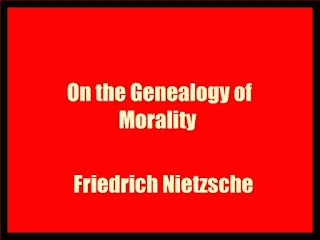 On the Genealogy of Morality: A Polemic (German: Zur Genealogie der Moral: Eine Streitschrift) is an 1887 book by German philosopher Friedrich Nietzsche. It consists of a preface and three interrelated essays that expand and follow through on concepts Nietzsche sketched out in Beyond Good and Evil (1886). The three Abhandlungen trace episodes in the evolution of moral concepts with a view to confronting "moral prejudices", specifically those of Christianity and Judaism.

Some Nietzsche scholars consider Genealogy to be a work of sustained brilliance and power as well as his masterpiece. Since its publication, it has influenced many authors and philosophers.


Nietzsche rebukes the "English psychologists" for lacking historical sense. They seek to do moral genealogy by explaining altruism in terms of the utility of altruistic actions, which is subsequently forgotten as such actions become the norm.

Review by Kyle van Oosterum
This treatise stands as the most sustained criticism of Judaeo-Christian values, or rather, the origin of said values. Nietzsche redefines them as the products of the brutal conditioning of our animal instincts over the centuries.
The failure to retaliate became "goodness", fear into "humility", submission to those who one hates "obedience" and cowardice into "patience". Discarding the methods of his contemporaries, Nietzsche comes up with a theory, which delineates how morals come to evolve within cultures; the transvaluation of values. Nietzsche tells us to imagine two sets of creatures; birds of prey and lambs. Birds of prey are necessarily noble, strong and proud creatures and lambs in contrast are weak, timid and cowardly. Lambs possess what we call a "slave morality" and birds of prey a "master morality".