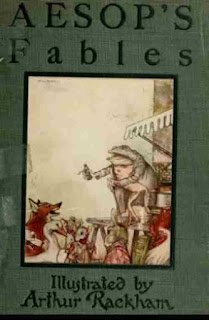 Aesop embodies an epigram not uncommon in human history ; his fame is all the more deserved because he never deserved it.
The firm foundations of common sense, the shrewd shots at uncommon sense, that charac- terise all the Fables^ belong not him but to humanity. In the earliest human history whatever is authentic is universal : and whatever is universal is anonymous. In such cases there is always some central man who had first the trouble of collecting them, and afterwards the fame of creating them. He had the fame ; and, on the whole, he earned the fame.
There must have been something great and human, something of the human future and the human past, in such a man ii to rob the past or deceive the future. Arthur may have been really connected with the most fighting Christianity of falling Rome or with the most heathen hadiiions hidden in the hills of Wales. But the word " Mappe " or ""Malory " will always mean King Arthur ; even though we find older and better origins than the Mabinogian ; or write later and worse versions than the"Idylls of the King.'"
The nursery fairy tales may have come out of Asia with the Indo-European race, now fortunately extinct ; they may have been invented by some fine French lady or gentleman lik^ Perrault : they may possibly even be what they profess to be. But we shall always call the best selection of such tales " Grimm's Tales " ; simply because it is the best collection.
The historical Aesop, in so far as he was historical, would seem to have been a Phrygian slave, or at least one not to be specially and symbolically adorned with the Phrygian cap of liberty. He lived, if he did live, about the sixth century before Christ, in the time of that Crwsus whose story we love and suspect like everything else in Herodotus.
There are also stories of deformity of feature and a ready ribaldry of tongue : stories which {as the celebrated Cardinal said) explain, though they do not excuse, his having been hurled over a high precipice at Delphi.
Some contents:
He fox and the grapes 1
The goose that laid the golden eggs 2
The cat and the mice 2
The mischievous dog 3
The charcoal-burner and the fuller 4
The mice in council 4
The bat and the weasels 5
The dog and the sow 5
The fox and the crow 6
The horse and the groom 6
The wolf and the lamb 9
The peacock and the crane 9
The cat and the birds 10
The spendthrift and the swallow 10
The old woman and the doctor 13
The moon and her mother 14
Mercury and the woodman 14
The ass, the fox, and the lion 15
The lion and the mouse 16