adventures of a young naturalist 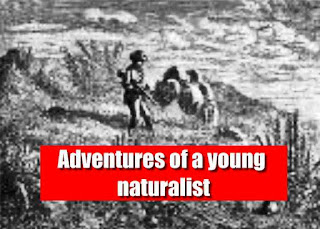 Although several of our most celebrated naturalists have climbed its lofty volcanic mountains, explored its lagoons and giant rivers, and traversed its immense forests, still, from the vast extent of that country, and variety of climate — caused by difference of elevation, — much yet remains to be done ere the public become thoroughly conversant with its arboreal and zoological productions.
The elephant, hippopotamus, lion, and tiger, the largest and most formidable of the terrestrial mammals of the Old World, are not here to be found; but their places are well supplied by the swamp-loving tapir, the voracious alligator, the stealthy puma, and the bloodthirsty jaguar, all well worthy of the sportsman's rifle,^ or of the snake- visioned native warrior's weapons — for the power of destruction in these animals during life is great, while after death they either furnish valuable skins or wholesome food. Moreover, here the wolf awakes the reverberating echoes of the forest with its dismal howl; the raccoon, opossum, and squirrel pass their lives in sportive gambols; the wild and the ocellated turkeys strut about, pompous in manner, as if conscious of their handsome plumage, while the timid deer and shaggy-coated bison roam over prairies or through woodland glades, as yet unacquainted with the report of the white man's destructive fire-arms.