The golden verses of Pythagoras 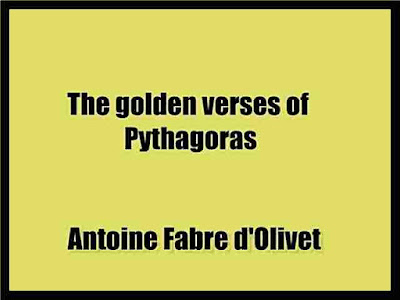 In this twentieth century, the sacred books of the ancients are undoubtedly better understood than they were even by their contemporaries, for their authors, by the greatness of their genius, are as much IN this twentieth century, the sacred books of the ancients are undoubtedly better understood than they were even by their contemporaries, for their authors, by the greatness of their genius, are as much nearer to us, as they were distant from them.
At the close of the eighteenth century, the light which came from the illimitable mind of Fabre d'Olivet shone with solitary splendour and was destined to be seen by only a few devoted followers. But history shows that a great inspirer always appears at the beginning of every great epoch, and however small the number of his disciples, these disciples with their pupils form the magnetic chain which, according to Plato, carries his thought out into the world. Fabre d'Olivet, bom at the Ganges, Bas-Languedoc, Dec. 8, 1768, was distinguished even in his own day not only for the extent of his learning but for the rectitude of his judgment and the sublimity of his conceptions.
If one can infer from the all too scarce records available since the calamitous fire which destroyed so many of his valued manuscripts, he evidently suffered keenly from the fetters of mortality, and sought with unfailing fervour what Porphyry so aptly called the "Olympia of the Soul." Saint Yves d'Alveydre, writing of him in La France vraie, says, that it was in 1790, while in Germany, he received his Pythagorean initiation, the profound imprint of which marked all his later productions. After returning to Paris he applied himself to philological and philosophical studies undisturbed by the terrible revolutionary storm.
In obscure seclusion, he amassed, to quote S6dir, "a disconcerting erudition." He became familiar with all the Semitic tongues and dialects, the Aryan languages, and even penetrated the secrets of the Chinese hieroglyphics.
It was during these ten years of retirement that he wrote his Examinations of the Golden Verses which were not published until 1813, with its dedication to the Section of Literature of the Imperial Institute of France. It is known that the Golden Verses of Pythagoras were originally transcribed by Lysis and that it is to Hierocles we owe the version which has come down to us.
Fabre d'Olivet has translated them into French verse, the style of which he calls eumolpique, that is, subject to measure and harmonious cadence but free from rhyme, with alternate masculine and feminine terminations. In the Essence and Form of Poetry which precedes the Golden Verses, he illustrates this melodious style, in applying it to the opening Unes of some of the well-known classics, and to others not so well-known.
.These Golden Verses, so remarkable for their moral- elevation, present the most beautiful monument of antiquity raised in honour of Wisdom. They formed the credo of the adepts and initiates. In his recondite Examinations, Fabre d'Olivet has drawn the metaphysical correlation of Providence, Destiny, and the Will of Man, in which combined action Destiny reigns over the past, the Will of Man over the future, and Providence over the present, which, always existing, maybe called Eternal. One will find this given at greater length in his Hermeneutic Interpretation of the Origin of the Social State of Man and the Destiny of the Adamic Race: admirable work of this little known theosophist, "to give him the name he loved best to hold," says Pierre Leroux in De VHumanitS.
The inequality of human conditions, upon which depend the social and political questions, forms one of the vital subjects of these esoteric teachings. He has also endeavoured to explain the true opinion of Pythagoras concerning metempsychosis which was his sacred dogma, and said that the dogma of transmigration of souls, received by all peoples and revealed in the ancient mysteries, has been absolutely disfigured in what the modems have called metempsychosis. His strange death, which occurred March 25, 1825, is mentioned by des Essarts in Les Hierophants, and other authorities including Pierre Leroux, have asserted that he died at the foot of his altar.
the book details : Download 6.6 MB