A man of purpose 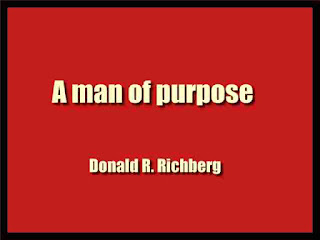 The day after Merrill's disappearance I received by express a box containing a jumbled mass of papers, some typewritten but evidently Merrill's composition, and some in his handwriting. No explanatory letter accompanied this manuscript. I have received no message from him since. These papers I have studied carefully. They do not solve the newspaper "mystery" of his exit.
They do explain his experience of living, so far as a man can explain his life by conscientious self-analysis and candid recording of his thought and action. Probably Merrill was not a great man, although he sat high in the councils of state and many of his enthusiastic friends thought that he might someday reach the presidency. But his life was to my mind a great life, a constant struggle for domination between powerful mind motives vanities, idealisms; and powerful body motives educated appetites, flesh hunger.
A strong mind and a strong body fought together and against each other in a life-long war against the world and a civil war within the warrior. In the pages that follow, Merrill will tell his own story, arranged for the most part in chapters as he wrote them. At times I have felt that the manuscript was too detailed or tiresomely technical to be of general interest, and I have condensed it, and there were gaps in the narrative where I have supplied a little history. But it is clear to me that Merrill did not wish to leave behind him a mere story of his life, as such a tale is commonly written.
He tried to write down how his mind developed as his bodily powers waxed and waned. Most of all he sought to make comprehensible that elusive thing called the spirit, which, he believed, supplies the motive power of life. He had no liking for the mechanistic, chemical idea of life. He came more and more to put his faith in the existence of a spiritual force having no dimensions, infinite in power, which energizes all life. He makes this most plain in his chapter entitled: "The God Who Grew" where he discusses the dynamic power of sex in energizing men and women to accomplish the sexless purpose of life.
The story of his life is really the story of The God Who Grew in himself the development of that part of life which he believed to be immortal. But since there is so little of orthodox religion in Merrill's manuscript, and since the theme of his life is essentially that of a man always seeking first to formulate some purpose in life and then to accomplish something of that purpose, I have thought it best to entitle his work with a thumbnail sketch of what the author tried to be: A Man of Purpose.