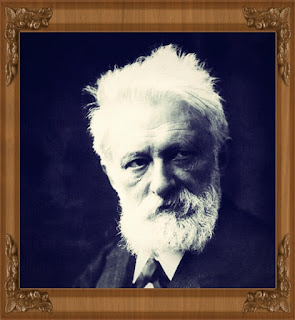 Rudolf Christoph was a German philosopher. He received the 1908 Nobel Prize for Literature "in recognition of his earnest search for truth, his penetrating power of thought, his wide range of vision, and the warmth and strength in presentation with which in his numerous works he has vindicated and developed an idealistic philosophy of life" after he had been nominated by a member of the Swedish Academy
Eucken received his Ph.D. in classical philology and ancient history at Göttingen University in 1866 with a dissertation under the title De Aristotelis dicendi ratione., However, the inclination of his mind was definitely towards the philosophical side of theology, after five years working as a school teacher at Husum, Berlin und Frankfurt, he was appointed Professor of Philosophy at the University of Basel, Switzerland, succeeding another of his former teachers at Göttingen, Gustav Teichmüller. He stayed there until 1874 when he took up a similar position at the University of Jena.
He stayed there until he retired in 1920. In 1912–13, Eucken spent half of the year as an exchange professor at Harvard University, and in 1913 he served as a Deem lecturer at New York University. During World War I, Eucken, like many of his academic colleagues, took a strong line in favor of the causes with which his country had associated itself.[4
The content: