The government of man; an introduction to ethics and politics 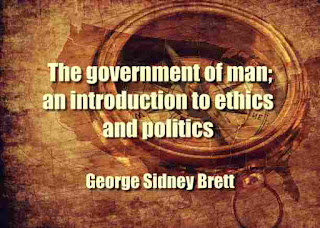 The following pages have been written to give an introductory account of the conditions under which practical ideals have been formed, and of the forces which have produced the most prominent theories. The study of ethical theories is too often conducted with no immediate reference to the historical setting of each theory; even political science is often divorced from the events which gave vitality to the theories, and every experienced teacher knows the practical difficulty of supplying a background for the continuous development of theories.
These pages are an attempt to meet that difficulty. The political and ethical theories are outlined; the immediate circumstances are indicated, and the outstanding features of the transitions from period to period are briefly noted. In selecting the material, particular attention has been paid to the subjects most akin to ethical and political problems; social life, religious movements, and the relation of the different classes in the different communities are the most relevant topics.
To secure brevity the ordinary historical material has been omitted; an appendix to each chapter gives the principal dates, so that the student may easily keep in mind the relation between the text and the general history of each period; some writers not dealt with in the text are indicated in those tables. The books named in each appendix provide material for further study; extracts of considerable length have been inserted to emphasise certain points and bring the reader into contact with other works. This is not intended to be a history of ethics, or of politics, or of civilisation; it is an attempt to keep before the reader s mind the continuous interaction of the different factors, which ultimately produce types of civilisation, forms of government, and theories of conduct.

The word " moral " Action and conduct Four phases These are phases of " personality " . i
PART 1THE ANCIENT WORLD
CHAPTER I
SOME ASPECTS OF EARLY CIVILISATION
i. Danger of the word " primitive " : Science lags behind morals ..... 7
2. Some views of " savages " . . . .8
3. The economic view of life: Relation of the invention to the organisation . . . . .10
4. Progress of peoples before historical civilisation. The family as a unit: Significance of difference in members . . . . .12
5. The patriarchate: Theories as to its universality: Matriarchate: The original " pack " : Totem
groups. -13
6. Stages of human history: The predatory life: Pastoral life: Agriculture . . 1 5
7. Transition to historical times: The Aryan group patriarchal: Hence its government: Homeric
form: The tribe and kinship . . .17
8. Custom and law : Religion: Distinct as superpersonal: Religion and ritual . . .19
9. Religion primarily social: Myth: Function of religion: The sinner: Excommunication Preventive purification . . .22
CHAPTER II
SOME ASPECTS OF GREEK SOCIETY
i, Greece the meeting-place of East and West: Culture of Homeric Age: The political organisation Monarchy tempered by advice. .28
2. The Homeric era a transition: From village to polis: Aristocracy and colonisation: Effect of
expansion on custom: Influence of trade. 30
3. The new type : Thales: Effect of science on religion: Previous decay of religion: Universalism: Xenophanes on unity - Milesian cosmology: Decline of traditional reverence: Defects of this phase . . 35
5. Religious movements: Orphism: Its brotherhoods: Its affinity with popular life: Com
pared with Christianity : Its defects and corruption . . . . -37
6. Foundations of morality: Homeric idea of conduct :
Its defects: Gradual emergence of fundamental points: Orphism in comparison with this. 40
7. Social conduct: Idea of justice: Legal sanctions :
Formal legislation exists without the spirit of justice . . . . .42
8. Development of democracy in Greece: Land be
comes private property: Struggles of the eighth century : Reaction of colonies: Manufacture
and its influence: Money and wealth: Union of lower classes: Inherent defect of the movement ...... 44
9. Progress toward union of thought: Early lack of system: Atomism unifies science: The reign of law : Relation of law to conduct: Effect of medical theories on laws of life, . 47
CHAPTER XIV
THE RELIGIOUS ASPECT OF CONDUCT
i . Origin of the modern standpoint: The Reformation
and the Independents: Hobbes on Church and State: Locke on Toleration . . . 286
The idea of reason as a ground of belief: Deism and
the influence of scientific progress . . 292
Mysticism in relation to authority: Dissent as a phase of individualism . . -295
Religious theories of conduct: Conscience and innate ideas : Rationalistic and moral sense theories :
The evolutionary doctrine . . . 298
5. The content of conscience: Divine law and reason :
Universality as a criterion of rational laws. 302
6. The doctrine of utility as standard: Leads to naturalism : Utilitarians fail to explain the  nature of conscience: Mill an exception : His deeper view due to Kant . . . 304
the book details : Download 10.3 MB