How to read English literature 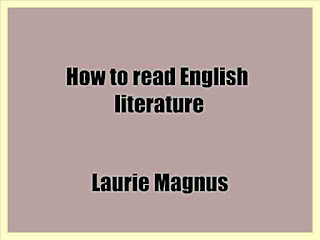 Excerpt
If a generalization may be permitted at this point a conclusion summarizing these data might be stated as the substitution of ' why ? ' for ' what ? ' in the attitude of art to nature. As was shown in an earlier chapter of this handbook, the English genius in the fourteenth century was content to express itself within definite limitations.
The journey of Chaucer's pilgrims from London to Canterbury was the measure, in a sense, of the ascertained knowledge of his day. Within that circumscribed area, the poet's expression was complete. His style had the freshness of an Attic morning. His material was in harmony with his mood and acquired artistic shape accordingly.
Again, when the Englishman of the Tudors awoke from the wearisome quarrels of rival dynasties and kings to the spectacle of a new world, revealed to his wondering sight by Gutenberg, Vasco da Gama, Savonarola, Copernicus, Luther, Raphael, and the rest, who had led Europe out of the dark ages, he asked his insistent ' what ? ' at the frontiers of the known world and found a language adequate to his curiosity.
He added Drake to adventure, Shakespeare to drama, Hooker to enlightenment, 206 How to Read English Literature Bacon to philosophy. An intense interest in knowledge and conduct, a practical object in the interpretative arts, a curiosity regulated by common sense but unlimited in daring these were the notes of Tudor England, till her spirit outgrew its frame, and an independent people refused to confide to the hands of the Stuarts the forms and rules of government which Queen Elizabeth had held so securely.
This, too, was Milton's generation, and such his distinguishing point of view. If Shakespeare, in his plays, answered the ' what ?' of conduct, from the level of Caliban and the clowns to that of Hamlet and Cleopatra, Milton's sub- limer rendering of nature's reply to the same question ranged through heaven and hell as well as through the known earth: he only chose, in the epic style, to concentrate his powers on a single, universalized problem, in his similar investigation of what humanity can do. Personality impinged on circumstances, personality in its environment this is the common note of English literature from Chaucer to Milton inclusively. Its historical progress is marked by the ever-ex- tended range of circumstances.
Now, step across the boundary-line, set approximately by the year 1660. After the ' what is there ? ' came the ' why is it? ' The Royal Society, which had existed in an informal shape at the University of Oxford throughout the period of disturbed politics, was incorporated at this time, and its philosophical transactions date from 1665. John Evelyn (1620-1706) and Samuel Pepys (1633-1703), to whom and to Pepys especially we owe so much of our intimate acquaintance with the things
The New Age 207 and people of the era, are busily writing their diaries. Instead of Drake and his fellow mariners pushing back the barriers of commerce, we have Sir William Petty, Edmund Halley and Sir Josiah Child inquiring into the sources of wealth and the relations of land, wages, and labour, and laying the foundations of the sciences of political arithmetic and physical geography. Instead of sailors under the stars, we have the founders of astronomy Seth Ward, John Flamsteed, and Robert Hooke.
Contents:
CHAPTER IX
THE NEW AGE 203
CHAPTER X
AIMS AND ACHIEVEMENTS ..... 226
CHAPTER XI
POPE AND JOHNSON ...... 252
CHAPTER XII
BREAKING BOUNDS . . . . . .275
CHAPTER XIII
THE OPENING CASEMENTS ..... 298
CHAPTER XIV
ON COUNTRY ROADS . . . . 324
CHAPTER XV
A GROUP OF POETS 355
CHAPTER XVI
WORDSWORTH 377
CHAPTER XVII
THE LAST CHAPTER 406
INDEX ........ 425
Publication date: 1907
Download Volume 2 - Dryden to Meredith 6 MB