The gentlemen's handbook on poker 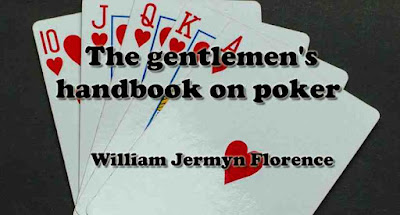 from the introduction:
The game of Poker has become popular during the last two decades^ and is now known in almost every civilized land. I have seen it played by the donkey boys in the streets of Cairo and by the Pi-Ute Indians on the plains of Nevada.
I was present on one occasion when a poker party was made up of a reigning monarchy a future king, and three princes imperial. That might well be called a ^^ royal flush.
That the game which could hold such competitors must be a fascinating one cannot be denied. It is indeed held by some to be the most dangerous of all games of cards since it can only be played for stakes, but it must be remembered that this is true of all games in which the player conceals the value of the cards he holds.
To the objection that poker is an unsocial game since it admits of no partners, each participant striving for himself alone, it is to be said that for this very reason poker absorbs its players with a deep fascination. Since one objective of the game is to mystify your adversaries as to the value of your hand, and as all sorts of chaflE and badinage are permitted, it cannot, after all, be termed an unsociable amusement.
Nonsense may fly from tongue to tongue, fast and furious, to any extent, providing it does not delay the game. Then, where a hand is shown down to detect its owner^s late futile attempt to mislead the table a rousing laugh usually follows so that the fun is always kept up.
Of course, one may have a bad-tempered or a churlish companion at the table, but such a one usually gets the worst of it when he betrays his peevishness. As in any game of chance or speculation, there are in poker opportunities to cheat. Long before poker, however, was even invented, cheat- ing at chance games was practiced by the unprincipled.
Author:, William Jermyn Florence
Publication Date:1892