Repairmen may gyp you 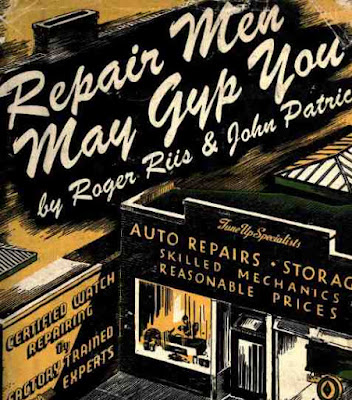 "For six months," says The New York Herald Tribune, the two authors of this perturbing little volume made a nationwide investigation of the higher nature, if any, of the American repairman.
Buying a used car of distinguished make, they engaged the assistance of a lady who looked more helpless than she was, and traveled 19,000 miles, with 1,700 calls on repair shops." "And no one," adds the Boston Post, "could ever pass this book with indifference
Whatever your experience with repairmen may have been, you'll find its counterpart here. You will point it out with great satisfaction, and you'll say: 'There!
That's exactly what happened to me once.' And you're lucky if it has happened only once. The Post can't think of any subject for research that touches more people.
Buy this book, and you will get your money back, over and over, in amounts saved through your wisdom." "There are some amusing stories in it," says the Baltimore Sun, and the Washington Post thinks that the funniest were "the authors' experiences with the Rube Goldberg testing machines used by some shops to impress customers."
"The articles in The Reader's Digest were interesting," remarks the Springfield Republican, "but they left room for doubt. The book, however, with details of the almost laboratory caution used by the authors in making their tests, is alarmingly convincing."
"Before you start on an automobile trip," cautioned the magazine Holiday seven years after this book first appeared, "take the advice of Riis and Patric.
The mechanics haven't improved since they wrote You." "It ought to help people avoid unnecessary expense," adds the Neivark News, for, declares the Water bury American, "this is authentic testimony." "It will help promote the longevity," believes the Boston Globe, "of readers' watches, radios, cars, and typewriters."
This survey was considered important enough by dozens of American newspapers to warrant editorial comment such as few books ever receive. Typical was this a part of an editorial in The New York Times- "It performs a real service for motorists." "By calling attention to the tricks employed," adds the St.Louis Post-Dispatch, "it should help to alert the public and discourage cheats."
This book is printed from the plates of the first edition, with new front matter, 30 illustrations, a new jacket, and a far finer, more durable binding. For press comments about another book by one of the authors of this one, see the inside of this jacket, the part lies against the-book and is-usualkt-left blank.
Publisher Florence, Or. : J. Patric
Publication date: [c1951}