Mathematical philosophy, a study of fate and freedom 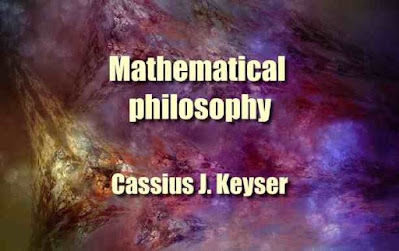 From the introduction:
For more than two score years I have meditated upon the nature of Mathematics, its significance in Thought, and its bearings on human Life.
In the following course of lectures, I have endeavoured to present, in the language current among educated men and women, some of the maturer fruits of that study. Though the course is designed primarily for students whose major interest is in Philosophy, I venture to hope that the lectures may not be ungrateful to a much wider circle of readers and scholars: To the growing class of such professional mathematicians as are not without interest in the philosophical aspects of their science.
To the growing class of such teachers of mathematics as an endeavour to make the spirit of their subject dominate its technique.
To the growing class of those natural-science students who are interested in the logical structure and the distinctive method of mathematics regarded not only as a powerful instrument for natural science but also and especially as the prototype which every branch of science approximates in proportion as its basal assumptions and concepts become clearly defined.
To the numerous but precious tribe of those literary critics who know that the art of Criticism owes its first allegiance to the eternal laws of thought. To such psychologists as are interested either in the psychology of mathematics or in the mathematics of psychology.
To such sociologists as a desire to conceive the nature of our humankind justly in accord with the mathematical principle of " logical types " or dimensionality. To the rapidly increasing class of engineers who are learning to conceive engineering worthily, as the science and art of directing the civilizing energies of the world to the advancement of the welfare of all mankind including posterity.
Finally, to all readers who desire to acquire a fair understanding of such genuinely great mathematical ideas as are accessible to all educated laymen and to come thus into touch with the universal spirit of the science which Plato called divine. In closing this preface I desire to record my gratitude to Mr John Macrae, vice-president of E. P. Dutton & Company, for his generous encouragement in this enterprise.

LECTURE I
Introduction
Intellectual Freedom and Logical Fate — ^Mathematical Obligations of Philosophy and Education — Common Humanity and Individuality — Humanistic and Industrial Edu-
cation — ^Man Not an Animal — Ethics Not a Branch of Zoology — Excellence and the Muses — Logic the Muse of Thought — ^The Heroic Tradition in Philosophy — Radiant
Aspects of an Overworld 1-38
LECTURE II
Postulates Concrete Definition of Postulate System — ^The Prototype of
Principles or Platforms — ^The Ancient  Craft of Geometry" — The Sword of the Gadfly — Clarity or Silence —Municipal Laws and the Laws of Thought 39-48
LECTURE III
Basic Concepts
Propositional Function and Doctrinal Function — Marriage of Matter and Form — Its Infinite Fertility — Propositions and Doctrines the Offspring — Verifiers and Falsifiers — Significance and Non-sense — A Question Asked by Many and Answered by None 49-59
the book details :