An analysis of the action consciousness 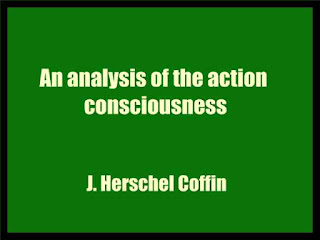 based on the simple reaction
The author began the experiments upon which this paper is based, in the fall of 1904, with the view of ultimately formulating some sort of definition of voluntary action, and of outlining, as accurately as might be, the psychology of it.
The impulse which prompted this bit of research seems to have been one in common with a general impulse toward a more complete and satisfactory explanation of the problem which action sets to psychology. For, within the last year (1906), a number of articles and books have appeared, — notably Ach's Willensthatigkeit und das Denken, and the Garmann Festschrift, — all of which attack the problem of will, and of voluntary action.
Generally speaking, it is safe to say that the phenomena of voluntary action have been, and are, the least understood of any group of psychical phenomena. In the course of the development of psychology, the chapter on 'will' has invariably presented great difficulty to the various psychologists, no matter to what school they may have belonged.
It has probably provoked more sheer speculation than any other set of mental phenomena and also lies at the bottom of a greater number of errors and misconceptions than anything else.
Moreover, a great amount of the confusion which has arisen within the science of psychology itself, both with regard to its relation to the other sciences and to philosophy, can doubtless be traced to the different interpretations which have been given to attention, will and voluntary action.
Historically, at least, the so-called psychological discussions of will have, in many instances, been purely metaphysical; and were not so, the explanations have led to many and various logical difficulties.
So it is not surprising that Experimental Psychology, with its more advanced methods, and keener insight, should approach the problem of voluntary action, together with other higher, more intimate and more purely psychical processes, with hope and some degree of confidence; and neither is it See Appendix surprising that the movement should be a general one.
The history of science reveals the fact that advancement has usually been effected by independent, but simultaneous dis- coveries by different individuals. Hence, in relation to the above-mentioned books and articles, this article may appear to be a timely one.
The Reaction Experiment has had a long and varied life and has been put to many uses. As a psychological experiment, it was in its infancy from 1820, when Bessel began to investigate the difference in observation times in astronomy and discovered what he called the 'personal equation,' to 1850 when the need was felt for a more accurate method of observation, and the Registration Method (chronoscope) was introduced.
During this period it meant little more than a possible means of standardizing individual differences, in the matter of correct transit observations. In 1856, Mitchell undertook to get the absolute 'personal equation,' by the introduction of the Reaction Experiment proper. He called it the 'personality of the eye,' however, thinking it a defect of that organ.
And in this connection, Hartmann discovered in 1858 that expectation and surprise greatly affect the personal equation: in all of which we have the glimmering of its psychological importance.
Thus the Reaction Experiment was finding its way into psychology from astronomy. But 30 years after the personal equation had been discovered Helmholtz (1850) conceived the idea of using the Reaction Experiment to measure the rapidity of neural excitation and transmission; so physiology became interested in it also, at a very early date. It was about this time that Bonders worked out his set of experiments on the rapidity of thought, which he believed would be represented by the difference between the reaction time and the physiological time, which he thought he already knew.
He, therefore, combined the physiological and psychological aspects of the experiment and made explicit its psychological value. His classic A, B, and C methods are familiar to every one who is familiar with the Reaction Experiment. And it was upon this as a basis that Wundt be- gan experimenting on the Reaction in 1861.'
The book details : Download An analysis of the action consciousness - 1.5 MB