The hurricanes of the Far East 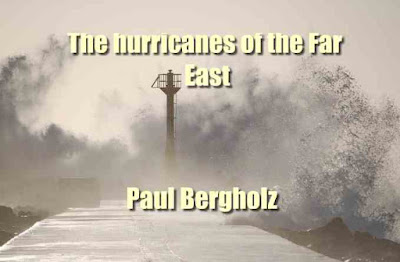 The prophetic words of our Emperor, "Our future lies on the Ocean" have not yet attained their complete fulfilment, but that fulfilment has made great advances, owing to the constant augmentation of our Merchant Navy.
The continued increase in the number of our ships is especially evinced by our trade with Eastern Asia, and in the waters which wash its shores. This is most clearly proved by the fact that the two greatest Steamship Companies of Germany, "The Nord- Deutsche Lloyd" and the "Hamburg American Packet Company", have quite recently established a fortnightly service in those waters.
We trust therefore that we have been fully justified in bringing out a book dealing with the Hurricanes of the "Far East", those deadly enemies of the saildi.
The importance of the subject is so great that many "works on tropical cyclones have been published, ' and more especially may it be said that there is no lack of monographs of such storms. In the preparation of these publications the observatories of Zikawei (Shanghai) and Manila have taken the most active part, have collected the valuable observational records relating to the storms and have worked these up.
These books, to which should be added the excellent publications emanating from Tokio and Hongkong, furnish us with valuable material for further work, and we have made IV as free use of them as was possible in the following pages. As for comprehensive works on the Hurricanes of the Tropics, we should mention particularly the writings of Vinez,) Ehot and Doberck, and the Sailing Directions of the Deutsche Seewarte. Even more full than Doberck's work, which refers especially to our district, is the book which, was brought out in 1897 by Padre Jose Algiie, Baguios 6 cyclones Filipinos,. which we have taken for the basis of the present volume.
According to his title, the author would appear to have confined his remarks to the seas surrounding the Philippine group, but in fact, he gives much more, he treats the Tropical Cyclones of the whole region. Algu6 especially relies on the works of Vines and Faura, who managed respectively the observatories of the Havannah and of Manila, and these have also led the present author to his familiarity with the observations of the Tropical Cyclones. Algae remarks in his book that it is scarcely possible for an atmospheric disturbance to develop itself over the waters of Eastern Asia without producing some signs of its presence in the Philippines. That Archipelago is therefore the centre for the observation and study of the storms of the "Far East".
In the present book, we have consulted not only Algue's work but also the literature, both old and modern, in so far as we have been able to gain access to it. If the matter only required translation, we have, if possible, go back to the fountain heads, the original publications. Besides the cuts given in the text, the book is illustrated by 30 plates, which have, for the most part, been borrowed from Algues work, but some of them have been taken from the pamphlet recently published in Manila by Algue, "The Barocyclonometer", and from the Boletin Mensual de Manila 1894.
A few have been drawn by the author. We must not omit to express our thanks to our publisher for the beautiful way in which the book has been printed and the ' excellent manner in which it has been turned out. We must further state our acknowledgements to the observatories in Eastern Asia for the readiness with which they have placed their results and their publications at our disposal.
We must only hope that our work may tender to the seaman some useful advice in his hour of danger, and may induce the scientific meteorologist to devote some attention to the difficult subject of these storms, their genesis and history.
the book details : Download The hurricanes of the Far East - PDF ebook -9 MB