A battle and a boy 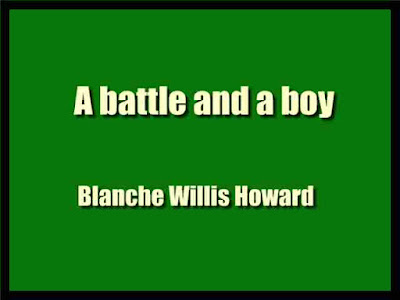 The cattle market occupied the town common. The child market was around the corner in the Bach Strasse. Burly peasants in long coats, red waistcoats, and high boots, tramped with a weighty air from one to the other, and it would be difficult to say which was the noisier where the children's shrill tones were continually raised in eager bargaining, or where the poor beasts, unable to make terms for themselves, yet lifted up their voices in loud but futile protest against such indignities as thumps in the ribs, having their jaws stretched to the verge of dislocation, and their legs pulled about in attitudes at variance with the laws of their anatomy.
Down the very middle of the long, rambling street, a mere thread of a brook came rushing and  A leaping impetuously, trying to overflow its rough board barriers. It was strong, and swollen with spring rains and the melting of ice and snow in the mountains, and made as much noise as if it thought itself a river. Franzl Einer, kneeling by the swift water, sailed chip-boats some with masts and some without as diligently as if he had come to the Ravensburg child-market for this sole purpose, and as if his future bread and butter would depend exclusively upon his skill in this branch of industry.
His back turned to the crowd, he watched his boats bob and whirl, capsize, disappear, or go gayly on past the people, and tall high- gabled houses, with upper stories projecting each over each, and sail out of sight; but he was proudly conscious they must in time reach the great watch-tower, through whose antique, arched portals the street ran away from the town and out among the fields. In all his eleven years he had never seen so many men and women together, so many cattle, and heard so many voices as that day at Ravensburg.
At first, he had been bewildered by the uproar and strangeness. The animals indeed looked familiar and homelike and diffused a warm, barn-yard smell which he found comforting. He felt strongly inclined to remain near an affable cow that manifested a certain placid pleasure in his society. But the people and children were pushing on to the Bach Strasse, in front of the Golden Lamb Inn, and a horse-dealer had sent him along with a slap on the shoulder and a rough
the book details : Download 8.2 MB