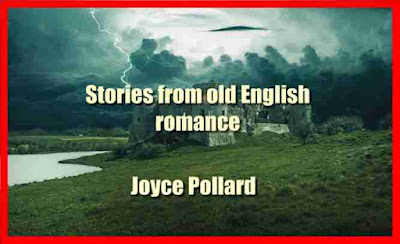 Excerpt from Beowulf and Grendel

long ago there ruled over the Danes a king called Hrothgar. He gained success and glory in war so that his loyal kinsmen willingly obeyed him, and everything prospered in his land. One day it came into his mind that he would build a princely banquet hall, where he might entertain both the young and old of his kingdom; and he had the work widely made known to many a tribe over the earth so that they might bring rich gifts to beautify the hall.
In course of time, the banquet-house was built and towered aloft, high and battlemented. Then Hrothgar gave it the name of Heorot, and called his guests to the banquet, and gave them gifts of rings and other treasures; and afterwards every day the joyous sound of revelry rang loud in the hall, with the music of the harp and the clear notes of the singers. But it was not long before the pleasure of the king's men was broken, for a wicked demon began to work mischief against them.
This cruel spirit was called Grendel, and he dwelt on the moors and among the fens. One night he came to Heorot when the noble guests lay at rest after the feast and seizing thirty thanes as they slept, set off on his homeward journey, exulting in his booty. At break of day, his deed was known to all men, and great was the grief among the thanes.
The good King Hrothgar also sat in sorrow, suffering heavy distress for the death of his warriors. Not long afterwards Grendel again appeared and wrought a yet worse deed of murder. After that the warriors no longer dared to sleep at Heorot, but sought out secret resting-places, leaving the great house empty.
A long time passed. For the space of twelve winters Grendel waged a perpetual feud against Hrothgar and his people; the livelong night he roamed over the misty moors, visiting Heorot, and destroying both the tried warriors and the young men whenever he was able. Hrothgar was broken-hearted, and many were the councils held in secret to deliberate what it was best to do against these fearful terrors, but nothing availed to stop the fiend's ravages.
Now the tale of Grendel's deeds went forth into many lands; and amongst others who heard of it were the Geats, whose king was Higelac. Chief of his thanes was a noble and powerful warrior named Beowulf, who resolved to go to the help of the Danes. He bade his men make ready a good sea-boat, that he might go across the wild swan's path to seek out Hrothgar and aid him; and his people encouraged him to go on that dangerous errand even though he was dear to them.
So Beowulf chose fourteen of his keenest warriors, and sailed away over the waves in his well-equipped vessel, till he came within sight of the cliffs and mountains of Hrothgar's kingdom. The Danish warder, who kept guard over the coast, saw them as they were making their ship fast and carrying their bright weapons onshore. So he mounted his horse and rode to meet them, bearing in his hand his staff of office; and he questioned them closely as to whence they came and what their business was.
Then Beowulf explained their errand, and the warder, when he had heard it, bade them pass onwards, bearing their weapons, and gave orders that their ship should be safely guarded. Soon they came within sight of the fair palace Heorot, and the warder showed them the way to Hrothgar's court, and then bade them farewell, and returned to keep watch upon the coast. Then the bold thanes marched forward to Heorot, their armour and their weapons glittering and clanking as they went. Entering the hall, they set their shields and bucklers against the walls, placed their spears upright in a sheaf together, and sat down on the benches, weary with their seafaring.