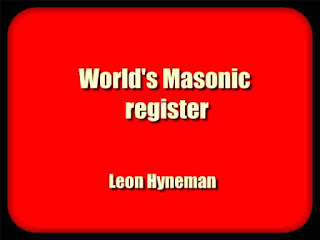 containing the name, number, location, and time of the meeting of every Masonic lodge in the world...with the statistics of each Masonic jurisdiction; also, the name...of each subscriber

We present the " World's Masonic Register" to the subscribers and the fraternity generally, with the confident assurance that the work will meet their approval, and fully come up to their expectations. The promises we made we have not only fulfilled to the letter, but we have even done more, as will be seen by a reference to the Prospectus.
The chronological data we believe to be entirely reliable, and the statistics as complete as it was possible to obtain them up to the time the printer was ready for the copy. That there are errors in the work, we, however, believe, as during its passage through the press we were most sorely afflicted. In publishing work so comprehensive as this, there are difficulties that make it impossible to have the data complete in every particular.
We will only refer to a few of them. There are some of the Grand Secretaries who not only delay the printing of their Annual proceedings to a period when they are of little practical use to their contemporaries, but some of the proceedings are deficient in many particulars, especially those which do not contain a summary of the statistics, which obliges each of the other thirty-eight Grand Secretaries to wade through all the publications, at much loss of time and patience.
The majority of Grand Secretaries, however, prepare their proceedings with a dispatch that is really surprising and show a disposition to excel in all matters connected with their official duties, the evidence of which is seen in the elaborate and complete tables which they furnish, not only of the statistics of the Grand Bodies in their respective States but of every other Masonic Jurisdiction. Another difficulty is that there is no uniform time of the meeting of Masonic Grand Bodies. Annual Communications are held in every month of the year, and hence, if the publication of the proceedings. should be delayed, the statistics of the preceding year, or perhaps two years before, must be taken, which is often the case. Again, the frequent changing, altering, and revising of Constitutions is another difficulty. Stability in legislation, uniformity in the time of the meeting, and the early publication of the Annual proceedings with full statistics are essentially necessary to exhibit the condition of the Institution, such as we have attempted in this work.
The Subordinate Lodges have no uniform time for holding their elections, and within the United States there are changes of officers in every month of the year; and as the Lodges in many jurisdictions held their elections in November and December, while this work was in course of publication, we were obliged, in such cases, to give the names of the officials who were in office. "We take pleasure in acknowledging ourselves indebted to the Grand Secretaries and other prominent brethren for their prompt responses to our requests for information, sought for during the sessions of their respective Grand Lodges.
The deficiencies and errors in the present work will be readily seen by the intelligent Freemason, and especially the Grand Secretaries, to whom they will be a guide to furnish us with more full particulars, and make corrections where they are needed, in order that the work which we propose to publish at the close of the present year may be perfect and complete in all its details. We will be under many obligations to the brethren if they will notify us of any errors that they may discover in this book, so that they may be corrected in the next edition.
The utility of work such as the " World's Masonic Register" must commend itself to the judgment of every Freemason. The subscribers to the " World's Masonic Guide," a work which Brother A. A. Lechler had purposed publishing, and which was intended to be similar in every respect to the " World's Masonic Register," will receive a copy of this book, as the " Guide" will not be published.
The subscribers to the publication will be benefited from this arrangement. Much of the success of this work is due to Brother Marshall. Wag- goner, of Norwalk, Ohio, through whose energy and application the largest number of subscribers was obtained for it.
Author: Leon Hyneman
Publication Date:1860
Download 16 MB - PDF ebook