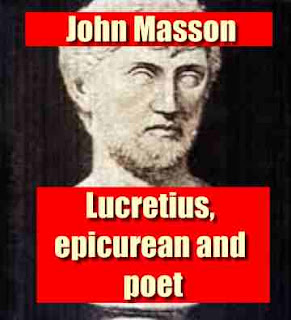 Excerpt from the author's introduction:
Lucretius' style is of the clearest, but his poem is so closely packed with Epicurean doctrines, and these are often so intricate, that we cannot dispense with an expositor. First and foremost, I must acknowledge my obligations to Munro.
Much as Lachmann performed for the text, he left almost everything undone for the exposition of the poem, a task of excessive difficulty. Munro's success is due to gifts rarely united in one man, his splendid mastery of Latin, his astonishing grasp of Epicureanism, to his vigour of intellect combined with the imaginative insight which allowed him to enter into the spirit of the poet.
It is in virtue of the last gift, which is akin to the poetic faculty, that Munro, even where we have to reject his reading, never gives a sense beneath his author. In spite of the advance in our knowledge of Epicurus's system, no editor has equalled Munro in his grasp of Epicurean doctrines as forming a whole. He realizes every side and bearing of Lucretius's argument and condenses in a sentence what later editors require a page to explain.
It is often forgotten that Munro's three editions of 1864, 1866, and 1873 have the value of three different books, representing the successive efforts of a powerful intellect, as bold as cautious, always penetrating deeper into the subject, each edition being a marked advance upon the preceding one. Munro built upon the foundation laid for him by the greatest scholar of France, and one of the greatest that Germany has produced — Lambinus and Lachmann. No other Latin classic can claim three such editors.
Since Munro's day, much has been done for the ex- position of the poem. Every student of it is indebted to the wealth of learning and shrewd criticism of Briefer. also to the elaborate commentary of Giussani, which often supplements Munro.
The edition of Bockemiiller (1873), though he is often deficient in judgment, is original and worth sifting. Mr J, D. Duff's short editions of Books III. and V. are very useful, especially the valuable introduction to the former (1903). Professor F. W Kelsey's edition (Books I., III., and V.; Boston, 1884) has a special interest in calling attention to the philosophical import of the poem. Heinze's very careful edition of Book III. (1897) marks a new and very conservative epoch in dealing with the text. Merrill's valuable edition (pp. 806; New York, 1907) reached me after the present book was in print.
It was impossible either to discuss in the former volume all the Epicurean doctrines referred to by Lucretius or to give all the evidence for the conclusions I have stated, these being based upon texts some of which are very intricate and difficult. In certain cases, a choice had to be made as to points to be left over to the Appendix. Perhaps one or two of these might have been treated more appropriately in the book itself if space had been allowed.  I am deeply conscious of the extreme difficulty of the subject and have gratefully acknowledged the value of several criticisms from which I hope the book may one day profit. The main point as to which critics have differed from 1 I may mention here the attack (it cannot be called ' criticism ') on my book in the Times (January 16, 1908).


The writer condemns it on the ground of minor omissions, which he magnifies as if they were central points. At the same time, he entirely omits to mention that in the Preface and elsewhere an ' Appendix,' or supplementary volume, is frequently referred to for subjects which there was no space to treat in full. The critic, who is of the extreme academic type, does not attempt to grasp the real ' content ' of the book, while in his remarks upon Epicureanism he is satisfied to deal with its merest surface. But, apart from this total difference of standpoint, his criticisms cover only a small portion of the matters dealt with. Notably, he avoids the greater doctrines.