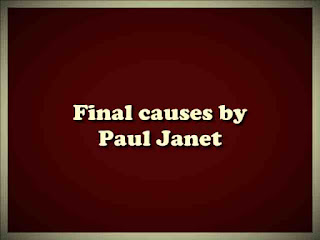 This translation has been undertaken on the recommendation of Professor Flint and others, who regard M. Janet's work as by far the ablest on the subject of Final Causes and as well fitted to supply a lack in our literature. By an interesting coincidence, while our version was passing through the press, the following statement appeared in an influential newspaper on August 29, in a letter from its French correspondent, the writer being in all probability unaware that an English edition was in progress:\
The French original, which was published only in 1876, has already attracted to itself much attention, and all candid judges, whether accepting or not its conclusions, have warmly acknowledged its great ability and value. Although not an absolutely exhaustive treatise on final causes, seeing that it does not attempt to trace their presence in the regions of intellect and emotion, morality and history, it is the most comprehensive work which has been written on the subject; while the omission indicated, whether intentional or not, is perhaps one which could be amply justified. It is also a truly philosophical treatise, alike in conception, spirit, and execution
. Truth alone is sought, reason alone is appealed to, and difficulties are neither evaded nor represented as less formidable than they really are; but, on the contrary, every serious objection, either to the existence of final causes in nature or to the interpretation which the author would assign to them, is stated in its full force.
Certainly, no disposition is shown to exaggerate the weight or worth of the answers which are given to these objections. The general plan of the work is so simple, and the manner in which its argument is gradually unfolded is so clear and natural, that the reader is never left in uncertain as to where he is or whether he is going. M. Janet possesses to a high degree the expository talent for which French writers are so distinguished.
At the same time, his earnestness and thoroughness as a thinker prevent his making any sacrifices to mere external graces, and hence he always writes as one who, having done everything to make himself intelligible to his readers, expects from them in return their whole attention. The first of the two parts into which the treatise is divided deals with the problem. Are there ends in nature?
In order to discuss this problem in a satisfactory manner at the present day, a man need not be a specialist in mechanical and biological science, but he must have an extensive and accurate general knowledge of such science, and an acquaintance with, and insight into, its history, methods, limits, and tendencies, which few specialists display.
M. Janet possesses these qualifications in an eminent degree and was well known to possess them before he wrote this work, in which they are so conspicuous. The possession of them had enabled him to intervene in the Materialistic controversy on the side of a spiritualistic philosophy more effectively perhaps than any other French thinker.
The present work is the natural sequel of two admirable snialler writings, Ze Cerveau et la Pensie (1867) and Ze MatMalisme Oontemporain {18'75, 2d ed.). The latter has been translated into English and German. The second part of the present treatise deals with the problem, What is the ultimate cause or explanation of ends in nature?
For its discussion, speculative talent and an intimate acquaintance with modern metaphysics are demanded. The demand is, of course, met in M. Janet, whose life has been assiduously devoted to the cultivation of- philosophy, and who is the author of works of acknowledged value in almost all its departments. French spiritualism has at present no abler or more influential representative in the Institute, the University, or the Press; and French spiritualism, although attacked from all sides, — by positivists, experimentalists, criticism, idealists, and mystics, — is still well able to hold its own, and at least as strong in men, principles, and services as any other school of French thought.
the book details : DownloadFinal causes by Paul Janet - PDF ebook 13.3 MB