Picus who is also Zeus 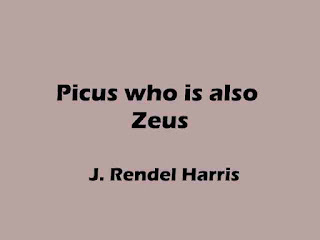 The present volume is a continuation of the one which was published in 1913 under the title of Boanerges, much in the same way as Boanerges was the expansion and extension of the previous volumes dealing with the Dioscuri in Christian Legend, and the Cult of the Heavenhj Tivins, which are cited in the following pages under the abbre^dated forms, Dioscuri and Cult respectively.
It is assumed (for how could one continue the argument on any other hypothesis ? ) that the main positions in the previous volume are sound, and that they furnish a secure foundation upon which the students of Man and of Man's Religions may build further: this does not mean that there are no corrections necessary and no re-statements desirable, but that, on the whole, we have the liberty to proceed: for the investigation, as far as it has gone, has thrown too much light into odd corners of human history to be altogether negligible.
The student of classical archaeology cannot afford to ignore it, for it explains many hitherto unintelligible features in Greek and Roman Mythology, and shows us in what direction to look for the origin of the Olympian worship.
The student of history cannot pass by discoveries which, to a large extent, enable us to re-write the story of the foundation of Rome and other great cities of the past. Folk-lore, folk-medicine, and the like, begin to be translated out of a thousand languages into a single speech, expressing the Unity of Civilisation and the Interrelation of Religions. Let us see how far we have gone, and then we shall see the lines that are laid for the progress of the present volume. It has been shown that mankind, in its primitive state, the subject of many fears, and evolving its faith from its fears, found itself beset especially by two Fears, one the great rational Fear, the Fear of the Thunder, the other, the great irrational Fear, the Fear of Twin Children. From the first of these Fears came the worship of Zeus, from the
book details : Download Picus who is also Zeus