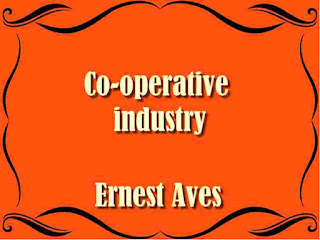 A competent and exhaustive study written for the general reader. In an introductory chapter, the author sketches the history of industrial cooperation. He then proceeds to expound his subject under three heads:—i. The Store: ii. The Workshop; iii. The Farm.
Co-operation is found in many forms, and in many degrees of completeness. The working-class "store," the " Productive " workshop or factory, the " Profit- sharing " Joint Stock Company or a private firm, the varieties of associated enterprise in agri- culture are among its numerous types. Most of them could be again subdivided, and it would be useless to attempt to describe them all by any single formula. Constitution, financial basis, aim — all vary and in consequence the part that they play alike in the co-operative movement itself, and in the industrial life of the nation.
The wider diffusion of profits, the maintenance of industrial peace, increased " efficiency," the strengthening of a threatened industry of prime national importance are among the ideas that are apt to assume special prominence in connection with one or another of these different co-operative forms, and thus while the significance of all may be included under some such general national aim as that of "increasing economic and social well-being," no narrower statement would suffice.
Since, therefore, co-operation stands for many things, it will be necessary to divide up the subject-matter of this volume, and the earlier chapters will be concerned with working-class co-operation, and its exceptional development in this country in the shape of the store and of the industrial and social movement of which the store is the most widely diffused, and most obvious sign. " Productive" co-operation and the partial application of co-operative principles to non -co-operative business and to agriculture, will form the subject- matter of later sections.
The cardinal principle of industrial cooperation is that of " equitable association," and in this, there is nothing that is either new or even modern. In some of its applications, indeed, the principles of cooperation go deep down into the more ordinary forms of industrial life.
They are peculiar to no epoch and to no people, and the independent productive society itself is, as Professor Marshall pointed out in his inaugural address at the Co-operative Congress, in 1889, "representative of a very ancient race." Although however, origins may thus be lost in a distant retrospect, the beginnings of industrial co-operation as we know it in this country today are rightly traced to much more modern sources, partly personal — an impulse springing from single life, and partly historical — which perhaps is only another way of saying that the engendering impulses were diffused among large masses of the people.
As regards the former, the source of inspiration is found in the life of one strenuous and famous man, Robert Owen, while those who first laid the sure foundations of success were a patient group of comparatively unknown men — the Rochdale " Pioneers."
book details : Download Co-operative industry - PDF ebook