Sacred mysteries among the Mayas and the Quiches 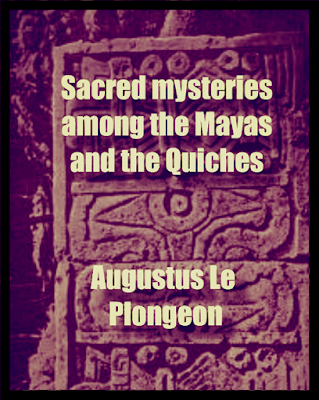 11,500 years ago. Their relation to the sacred mysteries of Egypt, Greece, Chaldea and India

The forests of Yucatan and Central America are today, for the majority of the people of the United States, even those who call themselves scientific and well informed, as much a terra incognita, as America was to the inhabitants of Europe before its discovery by Cristobal Colon in 1498, when for the first time he came in sight of the northern coast of South America and navigated along with it from the mouth of the river Orinoco to Porto Cabello in the Golfo Triste.
A few, having perused the books of J. L. Stephens, Norman, and other tourists who have hurriedly visited the ruins of the ancient cities that lie hidden in the depths of those forests, have a vague idea that there exist the remains of stone houses built some time or other before the discovery, aver authoritatively that " their builders were but little removed from the state of savagism, and that none of their handworks is worth the attention of the students of our age. Their civilization, they confidently say, was at best very crude.
They were ignorant of the art of writing; and the scanty records of their his- tory chronicled on deer-skins, in pictorial representations, are well nigh unintelligible. They had no sciences, no mental culture or intellectual development. They were in fact a race whose intelligence was for the most part of lower order. From what they did nothing is to be learned that has any direct bearing on the progress of civilization. " In 110 wise can they be compared with the Egyptians or the Chaldees, much less with the Greeks or Romans; it is not, therefore, worth our while to spend time and money in researches among the ruins of their cities.
It is to Greece, it is to Egypt, to Chaldea, that Americans must go in order to make new discoveries. In those countries must be established schools for the study of Greek or Egyptian, or Chaldean archaeology: and American schools have been established at Athens and Alexandria, and expeditions sent to Syria, to the shores of the Euphrates. But the European scientists, who for many years past have explored those old fields in order to obtain relics to fill the shelves of the museums of their capitals and turned up the soil of the Orient in search of archaeological treasures, now look to the Western continent in quest of the origin of that ancient civilization which they have been unable to find in the countries where they once flourished; and they look with that reverence which true learning begets on those ancient American temples and palaces that are objects of contempt for some modern American scientists.
Thus we see established in Paris the " Societe des Americanists " whose sole object is the study of all things pertaining to ancient American civilization. That Society, composed of students, spares no efforts to obtain knowledge respecting the architecture, the sciences, the arts, the language, and the civilization of the people who inhabited, in remote ages, the various countries of this Western continent. A premium of 25,000 francs has been offered for the discovery of an alphabet or key to the inscriptions carved on the walls of the monuments in Yucatan and Central America. M. Desire Charnay has been sent to obtain moulds of the sculptures and other precious relics that he hidden and lost in the recesses of the Central American forests.
Casts have been made from such squeezes as he obtained. These casts adorn the Trocadero Museum at Paris, duplicates of the same having been presented to the Smithsonian Institute at Washington by Mr Pierre Lorillard of New York. This gentleman is the only American who has ever contributed with his wealth and influence (he has spent 25,000 dollars) in expeditions for the recovery of facts and objects that may throw light on the ancient history of America.
Then again we have in Europe the international  "Congres des Americanists " convenes every four years in one of the capitals of Europe for the purpose of collecting all new data, obtained in the inTerval, concerning ancient American civilization. In England, at Cambridge, there is in the University a large building especially dedicated to Central American archaeology. There are to be seen, as I am informed by General Sir Henry Lef Roy, the casts and photographs obtained by Mr Maudslay, a wealthy gentleman who has devoted his time and wealth to the work of obtaining fac-similes in plaster and photographs of the ancient monuments of Honduras and Guatemala.

Who is  Augustus Le Plongeon

Augustus Henry Julian Le Plongeon was a British-American archaeologist and photographer who studied the pre-Columbian ruins of America, particularly those of the Maya civilization on the northern Yucatán Peninsula.
Download PDF book 11.3 MB 231 Pages