The will to doubt, an essay in philosophy for the general thinker 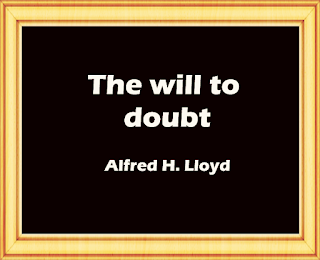 Excerpt:
The chapters that follow comprise what might be called an introduction to philosophy, but such a description of them would probably be misleading, for they are addressed quite as much to the general reader, or rather to the general thinker, as to the prospective student of technical philosophy.
They are the attempt of a University teacher of philosophy to meet what is a real emergency of the day, namely, the doubt that is appearing in so many departments of life, that is affecting so many people, and that is fraught with so many dangers, and in attempting this they would also at least help to bridge the chasm between academic sophistication and practical life, self-consciousness, and positive activity. With peculiar truth at the present time, the University can justify itself only by serving real life, and it can serve real life, not merely by bringing its pure science down to, or up to, the health and the industrial pursuits of the people, but also by explaining, which is even to say by applying, as science is "applied," or by animating the general scepticism of the time.
Here, then, is my simple thesis. Doubt is essential to real belief. Perhaps this means that all vital problems are bound in a real-life to be perennial, and certainly, it cannot mean that in its support I may be expected by my readers to give a solution of every special problem that might be raised, an answer to every question about knowledge or morality, about religion or politics or industry, that might be asked. Problems and questions, of course, the natural children, not of doubt, but of doubt and belief, maybe as worthy and as practical as solutions.
Some of them maybe even better put than answered. But be this as it may, the present essay must be taken for what it is, not for something else.
It is, then, for reasons not less practical than theoretical, an attempt to face and, so far as may be, to solve the very general problem of doubt itself, or say simply — if this is simple — the problem of whatever in general is problematic; and. . this done, to suggest what may be the right attitude for doubters and believers towards each other and towards life and the world which is life's natural sphere; emphatically it is not the announcement of a programme for life in any of its departments. Except for some revision chapters V. and VII. have already been published — Science, July 5, 1902, and the JouttmI of Philosophy, Psychology and Scientific Methods, June 1905. To Professor Muirhead, the Editor of the Ethical Library, I wish here to express my hearty appreciation for his interest and assistance in the final preparation of this volume for publication.
Alfred Henry Lloyd was an American philosopher
Download PDF book 5 MB