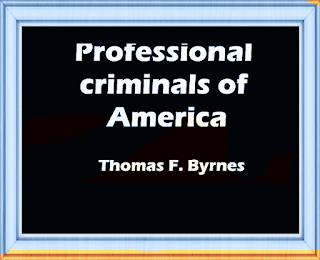 The volume entitled "Professional Criminals of America," now submitted to the public, is not a work of fiction, but a history of the criminal classes.


The writer has confined himself to facts, collected by systematic investigation and verified by patient research, during a continuous, active and honourable service of nearly a quarter of a century in the Police Department of the City of New York. Necessarily, during this long period, Inspector Thomas Byrnes has been brought into official relations with professional thieves of all grades and has had a most favourable field for investigating the antecedents, history, and achievements of the many dangerous criminals continually preying upon the community.

These opportunities have been improved to their utmost extent, and the result has been the accumulation of a vast store of useful knowledge, such as has never before been gathered by any other public officer or private individual.


Excerpt:
The ways of making a livelihood by crime are many, and the number of men and women who live by their wits in all large cities reaches into the thousands. Some of the criminals are really very clever in their own peculiar line and are constantly turning their thieving qualities to the utmost pecuniary account. Robbery is now classed as a profession, and in the place of the awkward and hang-dog looking thief, we have today the intelligent and thoughtful rogue.
There seems to be a strange fascination about the crime that draws men of brains, and with their eyes wide open, into its meshes. Many people, and especially those whose knowledge of criminal life is purely theoretical, or derived from novels, imagine that persons entering criminal pursuits are governed by what they have been previously and that a criminal pursuit once adopted is, as a rule, adhered to ; or, in other words, a man once a pickpocket is always a pickpocket; or another, once a burglar is always a burglar. Hardly any supposition could be more erroneous. Primarily there are, of course, predisposing influences that have a certain effect in governing choice.
A man of education, refined habits, and possibly a minimum of courage, would not be likely to adopt the criminal walks requiring brute force and nerve. Such a one would be far more likely to become a forger or counterfeiter than a highway robber. Still, under certain circumstances — opportunity and the particular mode of working of those who were his tutors in crime — he might be either, foreign as they would be to his nature. Criminal occupation, however, is, like everything else, progressive. Two things stand in the way of the beginner in crime attaching himself to what he may view — taking them in the criminal's own light — as the higher walks of predatory industry, the top rungs of the criminal ladder. The first is, naturally, lack of experience and skill; the second, lack of confidence in him or knowledge of him by the older and more practised hands, whose co-operation would be necessary.

Thomas F. Byrnes was an Irish-born American police officer, who served as head of the New York City Police Department detective department from 1880 until 1895, who popularized the terms "rogues gallery" and "third degree".