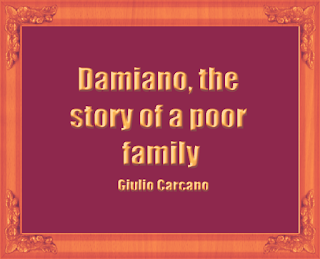 Excerpt from the translator's preface
Of all the authors of Italy, there is none to whom both epithets might be applied more justly than to Giulio Carcano. His fecundity is almost as amazing as that of Lope de Vega in Portugal. His variety is greater. He wrote poetry and prose, fact and fiction, with equal facility, though with various degrees of felicity. But he never was dull and he was always lucid.
And when he had no original work in hand he wreaked himself on translations. He was an author, editor, critic, dramatist, orator, statesman. He was a member, actual or honorary, of every learned or literary society in Italy, and by virtue of his translation of Shakespeare — still accepted as their standard version by his countrymen — was a vice-president of the English Shakespeare Society. He was bom August 7, 1812, in Milan, and he died there on September 5, 1884. At eighteen years of age, he published a little volume entitled Verses to My Mother. He followed up this very moderate success with other poems, with biographies, histories, and tales, until in 1839 he struck his true note in Angiola Maria, a Domestic Story, and achieved an international reputation. Though he was in some sort a follower of his illustrious fellow citizen, Alessandro Manzoni, his love for domestic portraiture, for current types, and for photographic in detail, make his work a sort of connecting link between the historical romance of his master and the realism of his contemporary pupils. Damiano, the Story of a Poor Family, was first published in 1840 and ran through many editions. It is in many respects his best, as it is certainly the most representative of all his novels, though it never surpassed the popularity of Angiola Maria.
It is a striking picture of life as it was lived by all classes of society in Milan, the typical city of Northern Italy, at the beginning of the second quarter of the nineteenth century, while the Napoleonic legend still overshadowed the souls of men, and therefore it is that one among all the multitudinous novels of our author which is most certain of survival. None of Carcano's works has before been translated into English, and the present version of Damiano was prepared expressly for this series.
Giulio Carcano ( Milan, 7 August 1812 - Lesa, 30 August 1884 ) was a politician, writer, journalist and patriot Italian.
Download