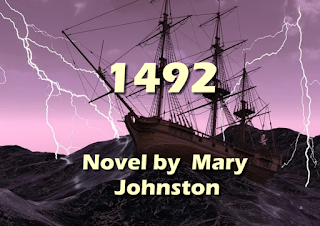 Historical novel about Christopher Columbus
About a Jew living during Christopher Columbus time. Trying to avoid falling victim to the inquisition. In the end, he ends up as part of the crew of Columbus -- as a kind of escape from Spain -- being persecuted because of his Jewish ancestry.
He ends up working on the ship as something like a medical doctor. And in the end, he is one of the white people left in America -- and he is the only one of those who survive -- greeting Columbus when he returns.
The novel also reveals the greed and harshness of the Spanish toward the Indians and each other. Ms Johnston does not deny the greatness of Columbus.
Download PDF book 9.6 MB