Across the zodiac: the story of a wrecked record by Percy Greg  Free PDF book (1880) 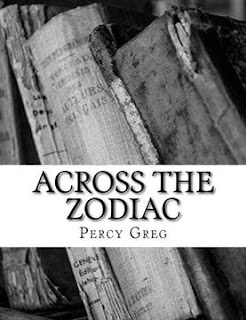 The frame's "Greg" narrator talks to a CSA officer (Ubernarrator), gone to Mexico to fight for Maximilian, then shipwrecked in the Pacific. The officer found this manuscript in an aerial shipwreck.

The narrator spends pages setting up his apergy ship, named the Astronaut. He has a garden to refresh the air, with birds, all netted in. Were the birds emergency rations? He does not say.

Very detailed science fiction ascent, including a concept of weightlessness as extremely reduced weight. The appearance of Earth at distance, the star-stuffed reaches--brilliant stuff, however accurate or not.

As regards the points where Logic might seem to clash with the furthest or deepest Philosophy attainable, the plan adopted has been to avoid all controversy by restricting our discussion to the questions that arise before such deepest Philosophy begins. Without advancing any opinion on the merits of metaphysical inquiry in general, or on any of its particular results, I wish to confine attention to a totally different set of problems.