The understanding of religion 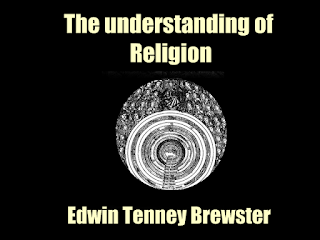 
If this book contained any theology, I should not have written it. I know nothing whatever about theology; nor have I, so far as I am aware, any opinion whatever on any strictly theological matter. But religion is, fortunately, a great deal more than theology. Religion is, in fact, really a branch of Natural History. That is to say, it is one of those sub¬ jects on which any one of us may hope for some sound understanding merely by keeping his eyes open, and reflecting upon what he sees in the light of what other men have reported of their observations, precisely as one does with any other out-of-door matter.


Now it so happens that, for a third of a century or so, I have been engaged off and on in calling the attention of young persons and others to various aspects of rocks and hills and trees which otherwise they were, as a matter of fact, not noticing. I hope now, trusting to the same devices, to point out certain aspects of religion which, also, as a matter of fact, too many people are, it seems to me, passing by on the other side. We of the older generation, moreover, who in the course of time have become more or less wonted to this unintelligible world, are apt to flatter ourselves that a mere multitude of days brings wisdom. We schoolmasters, in addition, do somewhat justify our existence by learning by dint of practice to take apart an obscure and complex matter, and to feed it out, easy end first.


It occurred to me, too, naturally enough, I think, that, as I found myself approaching the time of life beyond which men somewhat rarely correct erroneous views, it would be the part of wisdom for me to run over various of my long¬ standing opinions, and to make out how these relate themselves to present-day knowledge. I am, it changes, practised in no other method of arriving at truth than the scientific, and I have attempted by that method to come to some understanding of the phenomena of religion that I observe around me.

What I have noted, I have here set down for the benefit of other like-minded persons, either my contemporaries or, as I hope, of younger men and women, who, emerging into a wider intellectual life than has been theirs, find themselves for the moment more or less at sea. I write as a layman, for other laymen. Possibly, nevertheless, an occasional cleric may be curious to know what his parishioners think about between sermons.
If I may judge at all from my own experience, a study of the sort which I have outlined should have two effects. One ought, in the first place, to come to see more accurately than he has just what is and what is not possible of belief in this our modern world. In the second place, one ought, as a result, to gain a notably greater tolerance for opinions that differ from his own. After all, we are, each of us, dealing with vastly complicated, age-long problems. It is highly improbable that any of our present-day conclusions are final, or that the wisest of us believes more truth than error. On the other hand, most of those opinions which seem to us of the present age utterly fantastic and absurd, were each of them, in its day, sound and recent and inevitable. Men have said hard things of Sir Isaac Newton for clinging somewhat too long to his early theory concerning the nature of light and now "the New Physics" goes back to Newton's view of light, while at the same time it questions Newtonian gravitation! To scoff at any serious opinion is not to have read history.

Contents of the book :
I. What is religion? . I
Ii. The three parts of a religion 14
Iii. Religion and world-view
Iv. The astronomy of the bible 36
V. The cosmology of the creeds 51
Vi. Our four sources of opinion 63
Vii. Science and things-in-themselves 74
Viii. Primitive souls and ghosts 86
Ix. The problem of survival 107
X. "The new reformation" 124