The great god Pan, and, The inmost light 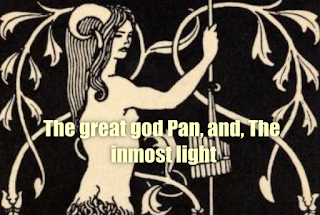 The Great God Pan is a horror and fantasy novella by Welsh writer Arthur Machen. Machen was inspired to write The Great God Pan by his experiences at the ruins of a pagan temple in Wales. What would become the first chapter of the novella was published in the magazine The Whirlwind in 1890. Machen later extended The Great God Pan and it was published as a book alongside another story, "The Inmost Light", in 1894. The novella begins with an experiment to allow a woman named Mary to see the supernatural world.
Clarke agrees, somewhat unwillingly, to bear witness to a strange experiment performed by his friend, Dr Raymond. The ultimate goal of the doctor is to open the mind of a patient so that they may experience the spiritual world, an experience he notes the ancients called "seeing the great god Pan". He performs the experiment, which involves minor brain surgery, on a young woman named Mary. She awakens from the operation awed and terrified but quickly becomes "a hopeless idiot"
Contents:
The great god pan
The experiment
Mr Clarke's memoirs
The city of resurrections
The discovery in paul street.
The letter of advice
The suicides
The encounter in Soho
The fragments
The inmost light
Download PDF novel