The quest of happiness 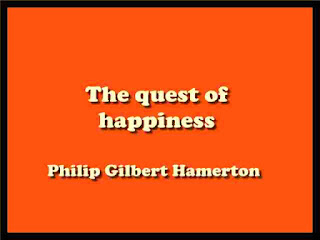 The "double law of the intellectual life high thinking and fearless utterance," Hamerton learned from Emerson; and, in plainer speech than Emerson knew, he brought this message to a Gentile world. His lucid thought, and smooth didactic style, combined with his courageous habit of never shrinking from the truth, were qualities that especially fitted him to instruct youthful minds.
The growing boy or girl who can be persuaded to " read, mark, and inwardly digest " The Intellectual Life,"  Human Intercourse," and the " Quest of Happiness," will have acquired a working philosophy of life. He will have been taught, not only how to think, but how to live.
His mind will be enriched, his standards of conduct will be elevated, and his chances for attaining the high- est kind of success in life will be vastly increased. Some critics of Mr Hamerton's earlier books have pronounced him " a cheery optimist; " but it will be found, by those who study his books impartially, that he was far removed from this; he had nothing in common with Walt Whitman, who " could not see one imperfection in the universe."
When Sir John Lubbock wrote his agree-able little volumes called " The Pleasures of Life," he was reminded that his own life had been so exceptionally " bright and full " that he had no right to judge the life of others.
This criticism has somewhat undermined Lub- bock's optimistic position. A man who dares to write upon the subject of happiness must be able to assure his pessimistic readers that he knows something of the opposite condition of being. It is therefore with the purpose of avoiding similar criticism that we take the follow- ing facts concerning the disappointments of Hamerton's life from Mrs Hamerton's interesting memoirs of her husband. Philip Gilbert Hamerton was born on Sept. 10, 1834. His childhood was exceptionally lonely and miserable, for his mother died when he was an infant, and he was brutally treated by a dissolute and drunken father.
After his father's death, the boy was sent to a large public school, where his lack of physical strength, and his morbid sensitivity- ness, prevented him from taking part in the usual boyish games; thus his school life was a solitary one.
A brief and unpleasant career as a soldier a profession for which Hamerton was entirely unfitted followed. Always fond of literature and art, Hamerton soon left the army and determined to be a poet and artist. A small volume, called "
The Isles of Loch Awe and Other Poems," appeared in print on the day when he came of age. This volume was published at the author's own expense; and only eleven copies were sold, out of an edition of two thousand. The fate of this first literary venture was but one of many disappointments which came to Hamerton in his early life. He lacked the passion of the poet and the inspiration of the artist; he had a clear perception of beauty, but the capacity to create beauty was wanting. In the last chapters of his autobiography, he speaks of the conditions necessary for perfect happiness, and says: " The element lacking in my own case was a success in work."
After years spent in patiently measuring the height of mountains, and the length of running streams, according to the false advice given art-students by Ruskin, Hamerton learned, through the rejection of three pictures, and the candid criticism of his wife, that he had not received the necessary training to make him a landscape-painter. These bitter disappointments came to him, close upon the loss of a part of his small income when the needs of a growing family made some sort of remunerative work imperative. It was at this time that the " Painter's Camp " was written, and accepted by Mr. Macmillan. From the first, this book was a success.
The freshness of the narrative and the charm of the style were fully appreciated, and an American edition of the book followed almost immediately. Thus success came to him from a direction in which he had not looked, and the particular kind of success for which he had always longed was never his. Yet all his failures and disappointments proved to be valuable material, which, entering into his experience, fitted him to preach an intelligible gospel of hope to a discouraging world.

I. A DEFINITION i
II. THE AUTHOR IS NEITHER OPTIMIST NOR PESSIMIST 5
III. ON THE DUAL NATURE OF HAPPINESS . . n
IV. ON HAPPINESS AS A GIFT OF NATURE . . 31
V. How OUR HAPPINESS is INCOMPLETE . . 52
VI. THE IMPERFECTION OF THE HIGHER HAPPINESS 60
VII. THE ORIGIN OF THE IDEAL ..... 66
VIII. HAPPINESS AND THE IDEAL 76
IX. THE SENSE OF REALITY 86
X. HAPPINESS IN OUR OCCUPATIONS .... 103
XI. CONGENIALITY OF OCCUPATION 108
XII. INSUFFICIENCY OF GIFTS 118
XIII. ON THE QUESTION WHETHER OUR HAPPINESS IN THE USE OF OUR FACULTIES
is IN PROPORTION TO THEIR STRENGTH. 132
XIV. THAT EVERY TIME OF LIFE HAS A HAPPINESS PECULIAR TO ITSELF . . . . 138
XV. OF THE PERFECTION OF THE SENSES . . 150
XVI. GROUNDS FOR RATIONAL ENCOURAGEMENT. 165
XVII. SOME REAL EXPERIENCES 175