How to write a good play 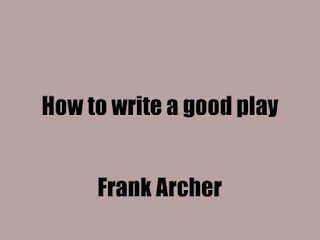 For those who have had the good fortune to succeed in mastering the difficulties which this volume treats, it may have but a limited interest; but the author believes that his views, as an actor of many years of experience, will not prove unacceptable to that large body of writers for whom the problem has a special attraction.
To write a play and have it accepted by a London manager! What an achievement for a young and unknown aspirant! To write a play which shall not only pass the shoals and reefs of acceptance, but that shall sail safely into the pleasant waters of public approval and commendation, and be greeted by the applause of the multitude, which shall, in short, carry its author to that haven which so many are ever struggling to make, Success.
To find your work in the delight of stalls, boxes, pits and galleries. What compensation for all the labours, anxieties and disappointments of the past! To be talked of at dinner parties, dances, clubs and social gatherings of every sort with pleasant interest. To hear Brown as he passes you in the street whisper to Jones, " That's Robinson, the author of the new play ' So-and-So.' "
To discover that the manager whom you met but a few months since, and whose arrangements were complete for several years, marvellously affable, and most desirous for a little chat with you. To learn that he is really anxious " to have another look " at that trifle you submitted to him so longing of and which his " acting- manager " declined on his behalf, with that courtesy so characteristic of him; and which in a fit of desperation you put on the back of the fire, having become quite conscious since that nowhere else could it have been ensured so warm a reception. To become suddenly aware that your correspondents have multiplied largely.
That actors have been struck with ideas for plays by you in which they are sure they will " do big things." That the most charming actresses, without any provocation, address you " My dear Mr Robinson." That old friends and acquaintances turn up unexpectedly, many of them, be it said, honestly proud of your success.
That you are beset by autograph hunters and harassed by photographers, whose collections of eminent men would be woefully incomplete without your co-operation. That you are the happy recipient of every sort of circular and advertisement, including patent pens, curious inks, bottles of wine, samples of perfumery and specimens of something you regard as having a certain appropriate suggestiveness — soap.
To be taught perhaps that popularity has its penalties as well as its prizes, and if you have prudence, to learn that this adulation is not unattended with danger. It is assumed that you are not one of those blest individuals to whom the failure or success of your play is a matter of supreme indifference.
the book details : Download How to write a good play - 5.7 MB