Fun With a Pencil by Andrew Loomis: How Everybody Can Easily Learn to Draw 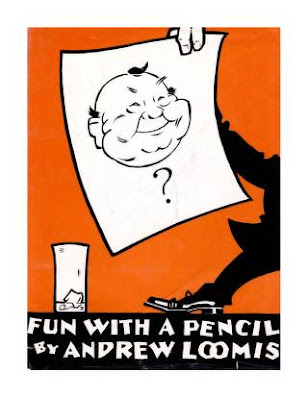 Introduction:
Get a pencil and paper quickly! Draw lightly all you see printed in blue. Take one stage at a time, on one drawing, until the last stage; then finish, with strong lines over the light ones, the lines we have printed in black. That is all there is to learn! These are "selected" or "built-in" from the basic forms. I call the basic drawings "Blooks," after myself.

Since Andy cannot talk to you personally, he put me in here so we can really get together. It's tough on Andy, for that guy really loves to talk, especially "shop talk/' Now this plan of action is based on the use of simple forms that are already known and familiar to you, and which you can certainly draw. From these simple, known forms, we build other forms, which without some constructive plan would be too complicated to draw. For instance, the top of the head, or cranium, is nearer to a ball in shape than anything else. So we start with a bull and add to it the shapes we want.
We thus "arrive" at the out- lines that are needed instead of guessing at them. Only the most talented end experienced artist can draw at once the final outlines. That procedure is most difficult and is the reason most people give up drawing.
But knowing how to "construct" makes drawing simple and easy, and a delightful pastime to anybody. By build- ing preliminary shapes and developing the outlines on them, we know. There is hardly anything that cannot first be constructed by the use of simple forms. "Santa had a belly, like a bowl full of jelly." Now that was a real observation. We know just what it must have looked like.
In fact, we can see it shaking! Now, the idea is to draw the bowl before the belly. If the observation is correct, it ought to be a simple matter to make it fairly convincing as an abdomen for old Nick. Of course, we will cover it with his coat and pants, but we'll be pretty sure the pants don't spoil the big idea. I picked on Santa because he'll never complain that I'm being too personal over his appearance. I might just as well have chosen your next-door neighbour, his lunch basket may be equally rotund, and shake some too.
Every form is like some simpler form, with this or that variation, and with pieces added on. The simplest 10 Forms we know are the sphere, the cube, and the egg. Before we could walk we recognized the sphere in Dad's new golf bulls; the cubes were in the sugar bowl; as for the eggs, well, the nicest ones were Easter eggs. I say, "Draw a line/' You cannot know just what I mean. A straight line? A curved line? A jagged line? A wiggly line?
There are a thousand kinds of lines; be more specific. But if I say draw a ball, a cube, an egg, a cylinder, a pyramid, a cone, a rectangular block, in each case the image you get is perfect. You know exactly what I mean. Instead of "line/' we shall think in terms of concrete and tangible "form," and proceed as if we were handling lumps of clay. You can appreciate the value of such a method, for you know the fundamentals even before you start; they are obvious to anybody.
If you never saw a ball, you should quit right now. As you proceed to build all sorts of shapes out of simpler ones, it is amazing what you can do with them, and how accurate and "solid" the resulting drawings will appear. The surprising part is that, when the construction lines are erased, very few could guess how it had been done. Your drawing appears us complicated and difficult to the other fellow as mine might seem to you now.
It takes on a look of professional workmanship, which indeed it has since the professional artist has by some method had to "construct" his work to make it "professional." If you will give the following pages even your amused attention, I am satisfied you will find much that will surprise you in the way of ability but perhaps you heretofore never guessed you had. If it absorbs your interest, you might find yourself clever enough to amaze those about you. Just now take my word for it that the method is simple, practical, and, I believe, possible for anybody to follow.
A circle is a flat disk. If you draw the "inside" contours, it becomes a solid ball, with a third dimension. We shall build other forms, like lumps of clay, onto this solidity. The construction will be erased, but the solid appearance will remain, giving form or the appearance of reality.


I promised you that all you need to know, to start this book, is how to draw a
lopsided ball. Whatever shape you draw can be used as a foundation for a funny

face. Do the best you can, even if the ball looks more like a potato.