The fragments of Zeno and Cleanthes 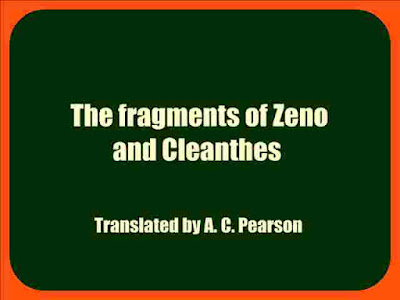 From the introduction:
Among the general aids, the first place is claimed by Zeller's Philosophie der Griechen, which has been constantly consulted. The edition referred to is the Second edition of the English Translation of the part dealing with the Stoics, Epicureans, and Sceptics, which appeared in 1880. In a few cases, the fourth German edition has also been quoted. Reference is also made to the English Translations of the other parts of Zeller's book, wherever available.

Except incidentally, Zeller gives up the attempt to trace the development of the Stoa in the hands of its successive leaders, and this deficiency is to some extent supplied by the ingenious work of Hirzel, die Entwicklwig der Stoischen Philosophie, forming the second volume of his Untersuchungen zu Cicero's Philosophischen Schriften.

To Hirzel belongs the credit of having vindicated the originality of Cleanthes against ancient and modem detractors, although in working out his views he often argues on somewhat shadowy foundations, and has unduly depreciated the importance of the contributions made by Zeno. Lastly, Stein's two books die Psychologie der Stoa (1886), and die Erkenntnistheorie der Stoa (1888), have been of great service, and his views, where he disagrees with Hirzel, have been generally adopted.

Many other books have of course been consulted and will be found cited from time to time, among which Krische's die theologischen Lehren der Griechischen Denker, and Diels' Boxographi Graeci, deserve special mention.

Although the results arrived at have been checked by the aid of modern writers, the ancient authorities and especially Diogenes Laertius, Plutarch, Sextus Empiricus, Stobaeus (Eclogae), and Cicero have been throughout treated as the primary source of information. The references to Stobaeus are accommodated to Wachsmuth's edition (Berlin, 1884). Susemihl'a article on the birth year of Zeno in the Nev£ Jahrhucher fur Philologie for 1889 appeared too late to be utilised for the introduction. A word must be said with reference to the plan of the present collection.

No attempt has been made to disentangle in every case the words of the writer from the body of the citation in which they appear. Although this is practicable in some cases, in others it is mere guesswork, and a uniform system has therefore been adopted.

For similar reasons the fragments have been arranged as far as possible in natural sequence, without regard to the comparatively few cases in which we know the names of the books from which they were derived. However, the arrangement has been a matter of much perplexity, especially in those cases where the authorities overlap each other, and several modifications in the order would have been introduced as the result of a larger experience, were it not that each alteration throws all the references into confusion.

The collection was made and put together practically in its present form before an opportunity offered of consulting Wachsmuth's pamphlets, and it was satisfactory to find that only a few of his passages had been missed. On the other hand, the additional matter which will be found here for the first time is not large. It may, therefore, be reasonably concluded that we now possess the greater portion of the material, which is available for reconstructing the history of the earlier Stoa.

For the sake of completeness I have included even those notices, whose authenticity is open to suspicion, as well as a collection of the so-called Apophthegmata, though it is often impossible to draw a strict line between written and oral tradition.

Two characteristics are especially prominent in Zeno s system, first, his metaphysical contrast between God and matter, and, secondly, his materialism. He seems to have been animated by a desire to combine the results of later thought with the simplicity and directness of the early Ionian physicists. All is to be evolved out of the fire: but fire is clothed with divine attributes, and sharply contrasted with the passive material on which it works. But Zeno did not observe that the combination is, in reality, self-destructive and that with a materialistic system metaphysics are superseded.

It remained for his successors to eradicate the dualism which is here involved, and, while thrusting into the background the points borrowed from Aristotle, to take their stand upon pantheism, pure and simple. Passing from the account of the cosmogony to the description of the different component parts of the universe

No void exists within the world, but outside it, there is unlimited void; at the same time, the world is kept together and preserved from dissolution into space by the attraction of its parts to the centre, in which the earth is placed. Zeno also explains certain natural phenomena such as eclipses, lightning, thunderbolts and comets, and defines time and colour.

the book details : Download The fragments of Zeno and Cleanthes 7.8 MB