Creeds and religious beliefs as they appear to a plain businessman. 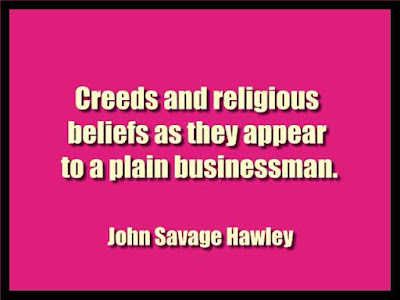 My friends and acquaintances will be surprised indeed, to learn that I have attempted to write a book, but not more so than the writer. I have much to ask of their indulgence for the lack of finish or completeness in both sentences and chapters, and no one will be better aware of the crudeness of this little volume than myself. The subjects under consideration have usually been treated by theological scholars, who brought to their work exhaustive study and investigation.
This work will not for a moment compare with theirs, except that it has the merit of brevity. It is written, however, by one who is in a perfectly independent position, not influenced by fear or favour, unhampered by church tenets or ecclesiastical inventions. Its purpose is merely to give in as few words as possible a few points of general information on Religious Beliefs to persons who will not be likely to take the time.
To study such subjects, except in a superficial manner. I have only attempted to write as one businessman would speak to another, calling things by their right names and wasting no time in words. Someone (perhaps more) of my friends will be likely to anxiously ask, " Does John Hawley believe in the Bible? "
I will answer, "Yes, I believe in everything good in the Bible." " Ah ! But do you not believe that it is the in-spired word of God, written by men who were divinely and specially inspired, and therefore writers only of explicit truth? " I will answer frankly, " No; writers were no more inspired two or three thousand years ago than they are today, or than they will be in the future. How absurd it would be for us to insist that our descendants — two or three thousand years hence — should believe exactly as we do, regardless of developments that will then have become history!
For aught we know, men of this opening century maybe the authors of what will be embodied in the Bible of two thousand years hence.
Contents:
Introduction 7
What do Christians think of One Another ii
The Apostle's Creed 14
Brahmanism and Buddhism 21
Confucianism 23
Mohammedanism 26
Hebraism 31
Christianity 35
Roman Catholicism 50
The Greek Church 71
Lutheranism 72
Episcopalianism 80
Presbyterianism no
Methodism 116
The Baptist Faith 117
Congregationalism 119
Unitarianism 119
Universalism 123
Christian Science and Mental Science 127
Agnosticism 135
Conclusion and Summary 138
Appendix 161
The book details : Download  Creeds and religious beliefs  - 3.3 MB