The psychology of courage 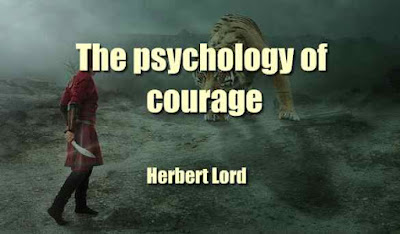 From introduction
Courage and cowardice have often strange ways with them. At times courage fails us in the most unexpected and unaccountable manner. Again, where we look for cowardice, we see courage stalking heroically across the stage. For example, a schoolmate was so much of a coward that boys younger in years, smaller in body, and weaker in strength were wont for a pastime to thrash him. His name was Howard. The schoolyard at times rang with cries of "Howard Cowardy."
This boy later enlisted in the Northern Army in the Civil War. He became very quickly distinguished for bravery, was promoted from the ranks, was made Aide de Camp, and bore dispatches across fields of death without flinching. Nothing daunted him. How came it about? Another example: two young men, friends, went early in the World War as ambulance drivers to France from an eastern city. In the terrors of their first battle, one of them unaccountably turned "yellow." As the saying is, he "crawled under the bed." He was utterly cast down by it, in great despair of himself, dared not hold up his head in face of the world that had honoured and respected him as a man of character.
What had happened? His comrade who knew him well, a friend indeed, wise in insight, proved his saviour. He convinced him that that in him which had failed was not he, that some temporary aberration had seized him. Not many- months after there was given this same man the Croix de Guerre for distinguished bravery in battle. How can this be explained? Let us take another instance.
A French Lieutenant of Artillery tells of the following case: A soldier at Verdun is in the midst of the severe fire steadily doing his duty when of a sudden a large shell bursts near him. He throws up his hands and runs away wildly. The lieutenant runs after him and calls him by name. The man seems not to know his officer, who pulls down his hands, and leads him back to his place.
Contents
I. Introductory ... 1
II. Mechanism in Man ..... 5
III. The Inborn Mechanisms in Man —
Instincts ... .14
IV. The Nature of Courage 24
V. The Simpler and Lower Forms of Cour-
age from the Point of View of Inborn
Mechanisms . .... 32
VI. Acquired Complex Mechanisms Work-
ing in Higher Forms of Courage 44
VII. Higher Forms of Courage Continued 58
VIII. Still Higher Forms of Courage — The Courage of Differing Patriotisms. 68
IX. The Ultimate Foundation of Courage. 83
X. Training for Courage in General 92
XI. The Conditions and Special Training of Soldiers for Courage . . . 106
XII. The Restoration of Courage When
Lost — "Shell Shock" . 130
XIII. Epilogue — Morale . . 145
the book details : Download The psychology of courage - 3.2 MB