A system of natural theism 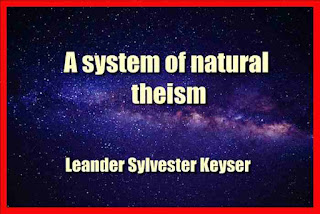 The author tried to refute atheism but he could not prove his Christianity.
From the forward:
Primarily this work is intended for a textbook in colleges, theological seminaries, and other schools which may arrange for such a discipline in their curricula. For this reason, the outlines and various divisions of the system are made conspicuous by means of numerals, captions, wide spaces, and different fonts of type. It is believed that this method will prove helpful in a number of ways. It will enable the reader and student to get a comprehensive view of the whole system and of its several articulations.
It will aid the instructor in the assignment of lessons and the student in his preparation for the classroom. The instructor will be able to formulate his questions in a pointed and relevant way, which is essential in doing first-rate pedagogical work.
A systematic study and mastery of any subject will also have its value as a mental discipline. In this way, too, the student may be led to form the habit of making a scientific arrangement of the various subjects he desires to investigate.
The knowledge that is well classified and coordinated is the most serviceable. The author also believes that a systematic arrangement of material and data will be just as acceptable to the general reader who may care to study such a theme as scientific Theism.
Many great and valuable books have been written on the subject of Theism, and the author has no criticism to pass on most of them. However, as an instructor in this discipline, he has found that most of these works, valuable as they are, have little adaptation for textbook purposes, and are often too abstrusely expressed to enlighten the general reader.
The author is convinced that the positive arguments for the divine existence set forth in Part II of this work have not been invalidated by any of the latest, well-attested discoveries of science, but have rather been corroborated by them; and in this respect, his views coincide with those of many of the most profound recent writers on Theism.
That there is a need today for thorough and well-reasoned teaching on this subject — and teaching, too, that gives forth no uncertain sound — is patent to everyone who is conversant with present-day college ideals and tendencies. Indeed, among all classes of thinkers, whether in college or out, there is a call and demand for a clear and positive presentation of the theistic proofs.
A questionnaire recently sent out by Professor James H. Leuba, of Bryn Mawr College, to a large number of the scientists of the country elicited the response that a majority of them are either agnostical regarding the existence of God, or have become actually atheistic. Professor Leuba's book has thus been characterized by an acute reviewer: "This is a plea, or rather the conclusion of a plea, for atheism, with its logical denial of immortality."
We believe, therefore, that work like the present one is sorely needed — provided, of course, we have been able to make the arguments effective and convincing. Whether we have succeeded or failed, our motive has been an earnest one. It has been to furnish a book for readers everywhere who may wish to have at hand the arguments by which the dangerous tendencies to agnosticism and materialism may be counteracted.
The author is especially anxious that the book may find its way into the curricula of many of the colleges of the country, whether Church or State institutions, so that our educated youth may be thoroughly grounded in theistic belief, and maybe saved from plunging into the maelstrom of materialistic science. The work might also be used as a supplementary text or reference book in the department of Apologetics in theological seminaries.
Natural Theism is the science that treats the existence and character of God in the light of nature and reason.
Our science is known by various designations, namely: Natural Theism, Rational Theism, Natural Theology, and sometimes simply Theism. The term "Natural Theism" seems to the author to be preferable for several reasons:
(1) The word "Natural" clearly distinguishes our science from Revealed or Biblical Theism;
(2) the word "Theism" is more suitable than the word "Theology" for students who do not intend to enter a theological seminary; (
3) the adjective "Natural" is preferred to the adjective "