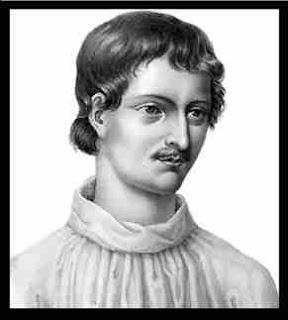 Mr President and Fellow Members: — Something more than five-and-twenty years ago I listened to some lectures at the Sorbonne_ on Giordano Bruno, his life and his philosophy. I remember that a fellow student expressed his opinion that they were a deadly bore — ennu- yeuxs a mourir. I hope that whatever other fault you find with me in treating the same subject
I shall not fall under this worst of condemnations. At that time Bruno was but one of a number of obscure philosophers of the Renaissance with whom the lecturer was dealing. Last winter in Italy I found that the name of Giordano Bruno was a war cry, ringing from Sicily to the  Alps — yes, far beyond the Alps, all over the Roman Catholic world, with distinct echoes in Protestant lands.
At the ancient city of Cologne I stood in an assembly of a thousand men, gathered to celebrate and defend the erection of Bruno's statue in far off Rome; while the week before, at a very large meeting of Catholics on the upper Rhine, the orator of the day, a distinguished delegate to the Rdchskammer, had called Bruno "a hog and an ass," — ein "Schwein und ein Esel, — and had been applauded for the epithets.
When on the epochal ninth of June last (1889), Bruno's statue was unveiled on the spot of his burning, in full view of the windows of the Vati- can, it is said that Leo Xlllth refused food and spent hours in an agony of prayer at the foot of the statue of St. Peter. Never have I read more bitter denunciations than have been poured forth concerning this act from the Roman Catholic pulpit. Many another man was burned in Rome, and some at Geneva; Savonarola at Florence, and John Huss at Constance; but I doubt if the statue of any one of these would have offended the Catholic church so deeply, would have rankled so venomously, like that of Bruno.
Nor was this feeling confined to the church of Rome. The learned dignitaries of the more conservative Protestant churches, when they knew anything about Bruno and his teachings, evidently shared it This was perfectly mani-est from the editorials in the London Times and in the official religious press both of Eng- land and North Germany.
What was the secret of this? What was it in Bruno that so peculiarly excited the ire of the theologians? And why has he, beyond all others, been chosen to represent the new life — la. vita Nuova — of independent Italy? These are the questions I shall endeavour to answer this evening.
And first, who was Bruno? Filippo Bruno, known in religion as Giordano Bruno, was born into life at Nola, near Naples, in 1548, and burned alive in Rome in 1600. A precocious lad, he assumed the garb of the Dominicans at fourteen years of age, and two years later made full profes- sion of vows in the Convent of St. Dominic at Naples. Soon promoted to holy orders he exercised the offices of the priesthood in and around the convent until 1576. In that year the Provincial of his order accused him of heresy on one hundred and thirty counts!
With a just fear of the result of the trial; Bruno cast aside his frock, renounced his vows, and fled first to Rome and then to Northern Italy. For three years he wan- dered from Genoa to Noli, to Turin, to Ven- ice, to Padua, gaining a precarious subsistence by teaching and writing. In 1579 we find him in Geneva, then the stronghold of the most uncompromising Calvinism.
This was no place for him. In a very few months, he was thrown into prison for defamatory libel and prohibited the sacraments for errors in doctrine. Escaping from the Calvinists, he made his way to Toulouse, at that time the literary centre of southern France.
There he spent a year, lecturing on Aristotle, until wearied, as he tells us, by its "clamours and scholastic frenzy," he was glad to move on to Paris. The atmosphere of that great city, then under Italian influence, suited him better. He obtained the position of professor extra- ordinary in the Sorbonne, where he lectured on the divine attributes and on the art of memorizing.
Two years later, that is in 1583, he journeyed to London, apparently at the invitation of the French ambassador to the court of Queen Elizabeth. In the English capital, he passed some three years.
At that day London was far from the imperial city on the Thames of our time. Its streets were filthy, its police a jest, and its inhabitants numbered only twice as many as those of Camden, on the other side of our Delaware. But among those inhabitants were such glorious stars as Shakespeare and Spencer, Francis Bacon and Sir Philip Sidney, and the galaxy of the Elizabethan age gathered around the throne of the virgin queen, herself-learned and a patron of learning.
the book details : Download Giordano Bruno: philosopher and martyr  -1 MB - 78 pages